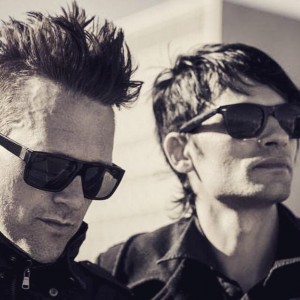 This is a story of when your friends know your likes well enough, you’ll be bombarded with great music. Since joining Fourculture, my friends have learned what I like. This is the case with my latest earworm Night Drive.

Some may call them a band, but really the Austin/Houston based duo of Rodney Connell and Brandon Duhon are secret agents out to change the face of electropop FOREVER. Having only released their first single “Drones” in June of 2013, the band would quickly gaining the attention of electropop fans by joining international acts like Tesla Boy, Gold Fields and Jupiter on tour. 2014 saw Night Drive at the movies and on the radio with singles, “After Dark” and “Young Rivals”. They spent that year writing and recording a full length album (due out later this year) while playing festivals, touring and producing remixes for other artists. With 2015 upon us, the band has moved on to the next phase of their mission, releasing the lead single from the new album called “Easy to Lie.”

Night Drive gives this great homage to some of the great new wave bands of the day like Depeche Mode without entering into that carbon copy mode; as there is a clear noticeable influence with their heavy use of bass and smart placed synths that don’t take over the whole track. They aren’t that kind of bubbly synthpop band…bringing a story of what could be the end of a bad relationship with the repetition of “Maybe tonight, there will be no more, maybe after tonight we’ll close the door.” If you find yourself having a bad day, maybe an end of a crappy relationship yourself, turn on “Easy to Lie” and you can take a long drive with a song that will clear your mind and your senses.

With the release of the “Easy to Lie” comes a sci-fi music video bringing a cinematic quality to the small screen that is your computer. Check it out below! They don’t make music videos like this anymore!

Written By
Serena Butler
More from Serena Butler
For many of us, we close our eyes to get taken away from...
Read More