Comprised of Gavin Mata Hari, Alex Keevill and Cheryl Pinero,  The Microdance is a band that cannot be easily labeled.  With a blend of Shoegaze, pop, rock and even a little synth goodness, this London group is ready to make their unique mark on the music industry, starting with an Indiegogo campaign to fund the recording of their debut album, New Waves of Hope. We had the chance to talk with the lead vocalist Alex Keevil to discover what The Microdance is all about. 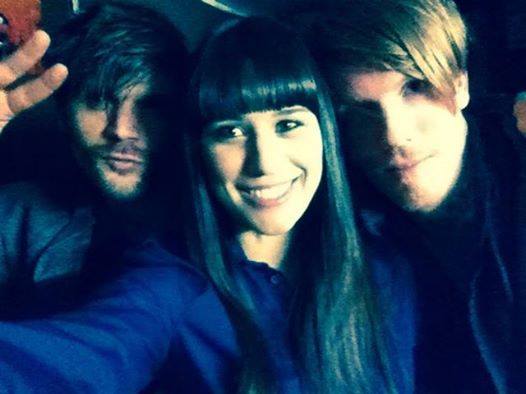 How did The Microdance get together?
How did your name come into existence?

Through the revolving door of exhaustive and frustrating trial and error! We’ve had some really shitty members; slacker type people who want to be in the band for all the wrong reasons.  That part has been painful! We’ve also had some stellar dudes who just couldn’t commit.

The name comes from a dance involving the smallest rhythmical movements possible, such as the fluttering of eyelids which my wife and I do, mostly to Postal Service’s “Clarke Gable.”  It’s pretty charming!

Many online outlets have described your sound as being a blend of genres from the 80’s and 90’s as well as shoegaze.  How would you describe the official sound of The Microdance? Who are your influences?

I’ve always wanted TMD to be a vehicle by which we can create an exciting blend all the parts we find exciting about alternative music under one banner. I may come from the school of aggressive alt rock, shoegaze or whatever, but I’m listening to ‘Ring’ by the Connells as I write this.  I love that album so much. So while people often write that a blend of bands like the Pumpkins, The Cure, Fleetwood Mac, MBV, Deftones, The Joy Formidable, etc. constitutes our core sound, the influences are actually a bit more comprehensive — some emotional, some sonic.  Sometimes we just want to convey an attitude, and that transcends genre. It’s possible to project the power of heavy metal , the imperious attitude of Phil Anselmo,  without chugging, distorted riffs. Some of the best pop music does exactly that. I mean try telling me The Naked and Famous don’t really mean it in a hardcore way with a song like “Frayed”!

You guys have launched an Indiegogo campaign to help with the funding  of your debut album.
What is your vision for the completed project?

This album is a really big one for us! We see it as our chance to finally do the band’s music total justice. It’s 12 songs picked from something like 100. It’s going to be a cohesive opus; a big, varied album but with an aesthetic sonic thread that ties it all together. The songs have a bright, heavy, open and hopeful feel. It’ll still have all the elements that people associate with our sound — atmospheric, textured and deep, but definitely the summer to our previous output’s dark winter! Some of the songs are 10 years old,  songs that we just haven’t approached yet because we’ve not had the right things in place to.

I’ve had a good few years of significant tribulation and that has been evident in all of our releases. While I never want our music to be depressive (it’s gotta be defiant!), it has tended to be on the sad or elegiac side of things…this will be the sun appearing from behind a dark, bloated storm cloud!

I’m really proud of what we’ve put out so far and everyone involved has done a stellar job creating that music. But it’s all been determined by compromising factors such as money, time, studio environment, etc. We’ve worked a lot with Blair Jollands at Glowb in Shoreditch — he’s an incredible engineer, producer and a wonderful man but we’ve not had the time or money to get him involved in the level we’ve needed. We’re a progressive band with massive vision and we’ve been backed into circumstances in which we’ve not really been able to represent the full scale of that vision. It’s been like “so we’ve got 3 days to record 4 songs, what can we do?”  So, our output been a bit of a hodge podge of singles and songs and we didn’t want to look back regretfully on them and say  “imagine if we had a bit more time or some better equipment for that one…” A good example of that which we did record is a song called “Fucking Fucker” on our Get Dark EP – a real fan favourite and a grand sprawling song…but imagine if we’d had a bit more time with it. Four hours for guitars, vocals done in half an hour… that’s just not enough. It’s still a wonderful song but hugely compromised. This album will be crammed with those ambitious songs, all brought to glistening fruition!  The studio rates in LA are half of what they are in London and the opportunity to go out there and spread the TMD gospel is too good to not take up. We truly believe that this will be one of the best debut albums ever – it’s a work of significant scope; we’ve had long enough to get our shit together for it.

Since you’re knee deep in prepping for your debut album, how would you describe your creative process?

I write the songs, demo them at home and bring them to the band who will make them sound better! There’s lots of rehearsing and rehashing. We’re now doing advanced demos for Frankie Siragusa, our producer. The band is currently just Gavin and me.  We’ve had a few members leave. This has turned out to be a really positive thing because things are much more focused now and we need that focus in LA. I’m more than happy to record bass and synths for the album. Gavin is the best band mate I could hope for, in both a musical and attitude sense. We have a consummate producer and musician in Frankie at The Lab too, so we’re in really good hands. When we come back to London with a fucking killer album, our objective will be to find the right people to play it with.

Having done some research on your producer Frankie Siragusa, he has a very extensive creative background.
What drove you to work with him on the album? Was there something in his catalog that stood out to you?

I’ve actually worked with Frankie before. Last time I was in LA, he emailed me to say that he really liked our Her Ride to the Stars EP and that he’d be happy to work with us for free. This was when he and his partner Jay Dawson were just starting out with The Lab. The studio was very different then! He’s since moved The Lab to a world class studio in Van Nuys. Frankie the man is the biggest factor, he’s the real deal! We know that we’ve got three weeks of 12 hour days with someone with the musical appreciation, technical abilities and passion that will allow him to do everything he can to help us bring this vision to reality. He’s the kind of guy that can find you that guitar tone from a Depeche Mode b-side in five minutes! He’s going to produce the album and I’m delighted about that. We’ve never had a producer before… but behind every great album is a great producer and we’re happy to hand him some of the creative reign. He’ll be improving the songs – for sure!

What’s ahead for The Mircodance?  What are your plans for world domination?

You’ll have to wait until you hear the album for that answer!

As with many of the artists we feature, their chance at world domination depends on you.
Check out The Mircodance’s Indiegogo Campaign and consider making a donation.