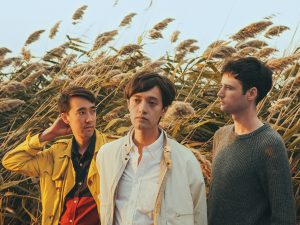 POP ETC, the Brooklyn based alt- indie pop band formerly known as the Morning Benders, has released the music video for their latest single, “Vice.” A danceable pop single off their most recent album, Souvenir, “Vice” was a summer hit on alternative radio that garnered buzz for the trio across the internet. The video for “Vice” has a low-tech feel with a refreshingly geeky take on what could otherwise be a dark subject.

“Vice” is a synth-heavy track with a retro vibe that teems with electronic elements and echo-drenched guitar, kept current with an infusion of vocalist, Chris Chu’s youthful energy and attitude. When it came to making the video, the group didn’t want it to be about an obvious vice like drugs or alcohol, but did want it to focus on some kind of addictive/obsessive behavior. The trio says that food was the first thing that came to mind. “We’re all obsessed with food, and the amount of time we spend looking for and going to restaurants, as well as researching food-related stuff, is definitely borderline unhealthy. In the video we wanted to capture that kind of nightmarish, weird, scary quality that any kind of obsessive behavior can lead to.”

So instead of venturing into any of the darker “vices,” the video addresses an obsession with food and does so by using humor, cooking instruction, and some really unusual food combination/visuals that definitely tend toward the unappetizing, weird, and nightmarish.  You can watch the video below.