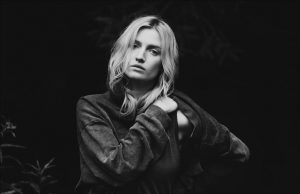 One for your radar – Hero Fisher (her real name as opposed to courageous occupation), is a British born and French raised singer songwriter currently based in London. Chances are if you are a Neil Young and/or Rolling Stones fan you might have already seen her supporting these stalwarts at Hyde Park. She is due to release her second album Glue Moon, after some name check reviews from members of Blur and The Horrors for her debut Delivery. The new album is not due out until next spring but the first single “Sylvie” is already out and it is a beautiful tempter for the forthcoming album.

It starts off sounding like a dark lullaby. Just vocals and what sounds like a harp, with echoes on the double tracked vocal. Then something off kilter occurs. About half a minute in differently timed drum loops join the mix, making it feel you are on a glacier where you can hear the ice crack as it slowly succumbs to movement. A minute and a half in and this changes to a more euphoric, uplifting feel as an organ enters the fray sounding like a choir, raising you off your feet. All these sounds then begin to intermingle to glorious effect, always with an interesting sound to catch your ear. Personally, the glacial feel never left me which is strange because the track feels like a faster ride. I have never heard any Hero Fisher before so can’t comment on whether this is typical of her output but it has certainly made me want to check out more, as well as pencil in the new album for next year. In fact, so taken was I with the sound that the lyrics have somewhat passed me by. It is one of those songs where my brain loves the overall effect so much it doesn’t want to work out the meaning of the song. Maybe the video might help spread some light on lyrical interpretation…

The video accompanies the song’s moody longing. Lots of woodland and glacial lakes [I knew it!] in weather promising a possible tempest, all seen through the filter of bleary eyed, slightly out of focus light of dusk. It has been remarked upon that the style is reminiscent of a found footage film like Blair Witch Project. This feels to me closer to a Nordic Noir, with an undisclosed menace or beautiful landscape around every corner depending on your interpretation. I am still no closer to coming up with a definitive meaning for the song but in all honesty, I couldn’t care less. Some things just exude a grace and beauty without having to dissect and understand the detail. Settle back and just let this weird and wonderful song wash all over you.