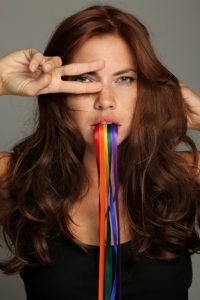 If “Couldn’t” is your introduction to the world of Erin K then you might be surprised to hear that in the past she’s been labelled as anti-folk and a ‘filthy mouthed indie darling’ (NME).

Her new video is bathed in all the colours of a lush Miami sunrise, where she marks an ending with a beginning, a new dawn following the end of a relationship.  She teeters around the edge of the ocean before venturing in, a one-take tease blurring the lines between melancholy and rebirth.  ‘This song was the last thing I wrote at the end of a relationship.’ she says. ‘I’m saying goodbye and that I “couldn’t” have done more, but also that it “couldn’t” have been any more beautiful in the precious moments we experienced together.’

It’s a far cry from other songs of hers (with titles such as “Assholio” and the sprawling “I just ate shit”) but it nicely rounds off her new album, Little Torch which is a showcase of her blend of pop and folk infused with a dark, dry wit.  On “Couldn’t” the backing is more accessible and refined but not at the expense of drama.  Despite the theme of an ending she is gaining strength throughout the song, ‘Now there’s a space where our hearts don’t meet and anyone who comes close to mine will see I am not so weak’ she sings, grateful for the experience even if there was some hurt.

Little Torch is out now.

Written By
Paul Davies
More from Paul Davies
Putting the “Thirst” into Thursday…here are a couple of mouth-watering tracks that...
Read More