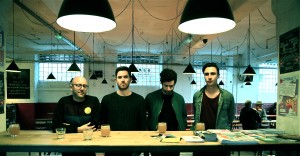 A year spent writing and playing together before releasing anything has certainly helped form their sound and enabled them to move away from the early big harmonics and move into minimal territory.

Following the release of their highly celebrated debut EP Meridian last year, the London quartet return with a new single called “Play Out”.

Meridian was a confident debut of shadowy electronic production with songs that were detailed and dense yet still pop music. The aesthetic behind the music was one of taking intricate instrumentation and arranging it into something simple.

Denser and richer than anything on the Meridian EP, “Play Out” was recorded between London and Leeds in a room full of vintage synthesizers with veteran producer Richard Formby (Wild Beasts, Ghostpoet, Darkstar) at the helm – “We wanted every sound on the tracks to be totally unique – we even put the drums through a modular synth.”

The song is a late-night groove of bubbling sequencers and pounding beats. It’s sparseness and brooding melancholia is set against Matt’s ethereal vocals. There’s a sinuous quality in the way the song unfolds and reveals itself.

Zola Blood construct their music out of big synth sounds, loops and vocal samples to create something that is minimal and opaque. This deceptively simple construction belies the complexity and intricacy of the instrumentation. Songs aren’t so much written as designed. It is evident they have a deep understanding of music production.

File alongside the likes of Caribou, Trentemoller, The Knife, Thom Yorke and Portishead.

“Play Out” will be released on Pond Life Songs on the 4th of September.

Zola Blood on the web: