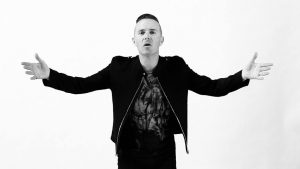 [debut] is releasing a new single and video today, “HELLO.” It’s the first single off an EP of the same name scheduled for release later this year. More than a band, [debut] is an LA-based music and art collective fronted by songwriter and producer Gareth Thomas and an ever-changing supporting cast.  [debut] is a Fourculture favorite, with a sound somewhere between electro-pop and alternative rock, with echoes of Depeche Mode and IAMX. On “HELLO,” Thomas has produced a track that is as cinematic and challenging, as it is intense and emotive.

Fresh from touring with electronic music legend, Gary Numan, and some huge Hollywood film & TV song placements (“Point Break” and “The Expanse”), Thomas is already mid-production on the new EP. Working out of his custom-built studio in Los Angeles with just a few carefully selected technicians, Hello will be completed over the summer months and released in September to coincide with some live shows.

“HELLO” is a deliberate departure from 2015’s Postcards From Berlin. Thomas says he likes to try something new on every project. And as “Postcards” was a huge production with many musicians and people involved, “this time I wanted to strip it all down and do something simpler, more pure. “HELLO” is very electronic with some hard guitars and machine beats. It’s got a lot of space in the mix and is way more up-tempo than I usually do, but still with my trademark [debut] darkness.” The video for “Hello” was shot in Los Angeles by Tomo Muscionico and edited in Berlin by Valquire Veljkovic. It is an artistic exploration of the psychotic relationship and very real tension that exists between our physical actions and our inner anger. Give it a view, then follow [debut] at the links below so you are among the first to know about any announced shows.