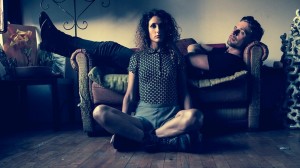 It’s  crazy when a song seems to depict a chapter of your own life. Listen carefully as The Controversy tells an all too familiar tale. It is one tale that I found myself experiencing once, many, many moons ago. Off their upcoming album Don’t Count on Me is the self-reflective track “Two Voices.”

Again, the storytellers known as The Controversy never cease to amaze me. “Two Voices” enters in with a very slow and deliberate haunting reverbing vocal. Laura Vall’s gorgeous lyrics describe her life as a shy kid trying to fit in. Right when you least expect it, the chorus kicks in with what could be the most upbeat tempo of any of The Controversy’s current releases. It completely caught me off guard because it isn’t this kind of tempo which the band is known for…still completely haunting in their typical fashion but bringing on a dance like feel. Then, Thomas Hjorth comes in and knocks out a gorgeous instrumental bridge. It’s psychedelic meets science fiction in nature. “Two Voices” has become my favorite song by The Controversy so far.

As always, The Controversy works up beautiful music that is guaranteed to make you feel something or to think in a different way. Their new album may be tentatively called Don’t Count On Me but we count on them to make some magic in the studio that everyone should get their hands on.  Get it on Bandcamp.

Written By
Serena Butler
More from Serena Butler
Obsession is one of the most intriguing and unsettling feelings one could...
Read More