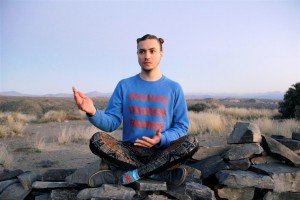 Stefan Pruett is a relative newcomer on the indie music scene and his debut album Carefree is scheduled for release later this year. Melding 80’s new wave, punk rock and dance with an indie aesthetic, Pruett sees his music as dark-wave pajama-pop. That is certainly an apt description of his first single and the title track from the upcoming LP, “Carefree”.

Pruett started out as a straight up punk rock music fan — listening to bands like Crass, Operation Ivy, and Fugazi — but, when his friends introduced him to 80s new wave music he was soon hooked on bands like New Order, Bauhaus, and Joy Division, too. And while the synth-heavy “Carefree” pays homage to Pruett’s sonic influences, it does so using a light touch and a fresh direction. With its electro/dark-wave vibe, dreamy psychedelic synth interludes, seductive vocals, and lyrics that you’ll find yourself singing at random moments of your day, “Carefree’s” retro groove signals we can expect to hear good things from Pruett.

Carefree is expected to drop in the early summer, 2015.  You can follow Stefan at the social media links below to keep up with the latest happenings.