The arcane incorporeal child derived of a union between Soft Cell, The Prodigy & Siouxsie and the Banshees – now there’s a thought! One way perhaps to describe the sound of Vodsel, but this genre dodging duo of Paul Davies and Chris Williams from Manchester take everything that musically defined a generation and reanimate it in the musical blender we know as Vodsel. 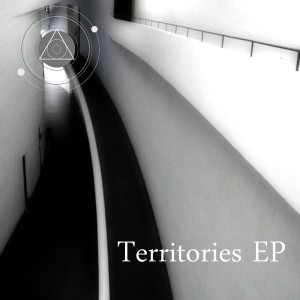 With the release of Territories, fans will welcome the addition of 3 new tracks to their collection — “Hinterland”, “The Last Night” and “Karelia” which will be available for download on February 10 from Bandcamp and later this month from other sources.

When Vodsel releases new material you can always be guaranteed that it’s going to be hard hitting, punchy and full of beautiful pain-free aggression delivered with a familiarity that, if you remember the time when the “indie” charts were mainstream, will have you grasped in trip of nostalgic longing for more.  And more there is, as the collection of EPs and tracks found from Vodsel on line from previous releases will satisfy the hunger this EP will leave you with.

However, this release takes Vodsel down a slightly different & darker path than previous material.

“Hinterland” (an area lying beyond what is visible or known in case you were wondering what it meant) is an outstanding track and one of those that even at 6:06 minutes long is too short! Taking the best of what Vodsel do, fuzz guitars & bass, this is a hard punching beat with loops and riffs that drive along in their own unique style iced with a wistful vocal performance which forces the listener to hit the “repeat” button frequently.

“The Last Night” could be described as one of those album style tracks that may not initially be picked up as being “classic Vodsel”.  A departure from their usual more melodic offerings, “The Last Night” finds Vodsel injecting their passive aggression in a slightly more obvious manner than what we’re maybe used to. Guitar riffs that wouldn’t be out of place on late 70s and early 80s Banshees albums this “darker than usual” track could be described as one of those album gems you find growing malignantly into your favourites list.

“Karelia” is another different track from Vodsel. More of a vocally focused track, it crescendos to what we might expect from previous material before leaving you back to where it started sailing on a sea of sentimentality. It’s a track that leaves plenty of space to carry the vocal and a slower tempo than what we’re used to that sets this track apart from others.

Territories polishes an already defined Vodsel sound which has its roots firmly planted in the darkness that was first born from that early 80s post-punk era of angst that thankfully shattered and fragmented the music industry into multiple sub-genres. As with any music, listeners will find familiarity in Vodsel at the same time as finding a sound that is unmistakeable and instantly recognisable as “Vodsel”.