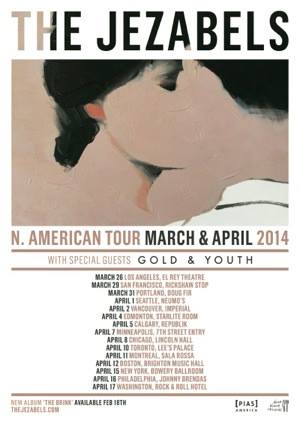 From Dan Grech-Marguerat, the producer who brought Lana Del Rey, Radiohead and more music of incredible talent, comes perhaps the most original, fresh and talented of them all. The Jezabels have a rock sound so resounding it grabs your attention and captivates you for the duration.

Originally from Australia, the band features extreme keys from Heather Shannon, some seriously dark, yet uplifting strings from guitarist Sam Lockwood, and kick-ass, heart pounding percussion from drummer Nik Kaloper. The cherry on top is the incredibly projected vocals of Hayley Mary whose range, which goes from a bluesy alto to an operatic and resonant soprano all with an ease, should be looked upon with serious envy from the most popular voices of today. If you can muster yourself away from the simple complexity of the music and the almost mystical captivation of Hayley’s voice, the lyrics tell a story of epic proportions. Each song tells its own story, journeying through the darkest aspects of the human emotional spectrum into desperate, heart-pounding love.

The band has gained immense popularity through the last two years, with their first album garnering them 8 nominations in the ARIA music awards, and winning the Australian Music Prize Best Album award. Their sophomore album, The Brink, debuted last week on the ARIA music scene in Australia at number 1 on the Australian artist album chart, and number two for overall Australian Albums.

Starting with the U.S. release of The Brink on February 18, the band will be embarking on a North American tour for the month of April. Take time to listen to the Jezabels and fall in love with their unique brand of sound, which is sure to reinvent music, taking it back to the art form it was originally designed to be. In this day and age, a talent and artistic expression of the caliber The Jezabels display is nearly impossible to find.

The Brink is now available on iTunes.