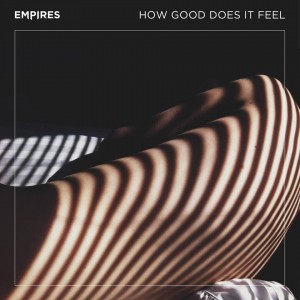 Emerging Chicago-based band, EMPIRES have been creating quite a buzz since Fourculture first told you about the band’s upcoming EP, How Good Does It Feel.  GQ has named the title track and lead single, “How Good Does It Feel,” one of the “25 Best Songs of the Summer; the band released the official music video for “How Good Does It Feel”; unveiled the second single off the EP, the upbeat danceable track “Please Don’t Tell My Lover”; announced their television debut will be on The Late Show with David Letterman on June 17, 2014; and last week the band premiered  the breath-taking and haunting single, “Hostage,” a track I have had on repeat since first hearing it.

I have been following Empires since first hearing their 2012 self-released album Garage Hymns, and still have songs from that album on my Favorites and Road-trip playlists. With their distinctive and dark indie-rock sound, the Empires have drawn comparisons to The National, The Killers, as well as Editors.  In addition, lead singer Sean Van Vleet has the type of organic, rough, raspy voice reminiscent of John Mellencamp and Bruce Springsteen — complete with that raw unpolished edge that can reach inside and scrape your emotions raw, while deftly soaring to meet the musical heft of the band.  Empires have a sound that will make you feel, whether through the seductive drawl of “How Good Does It Feel,” the upbeat, got to move your feet, vibe of “Please Don’t Tell My Lover,” or the haunting soulfulness of “Hostage.”

How Good Does it Feel is due out on June 17 and will be available in digital and on limited edition 10″ vinyl.  John Congleton (St. Vincent, War on Drugs, Black Angels) produced the EP as well as the band’s debut album on Chop Shop/Island Records, Orphan, due out later this year.

This summer Empires is playing Bonnaroo, Austin City Limits, and Summerfest and is also touring with The Chain Gang of 1974. You need to check out the links below because you don’t want to miss out if they play at a venue near you.

EMPIRES on the web: