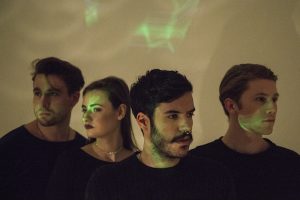 Bergen based foursome Living have been busy this year with a host of shows in Europe and the US.  To round off the year they have just released their self-titled EP and it’s a snug blend of ethno-electronica with some chillwave and retro vibes that will keep you warm over the coming winter months.

Opener “Risen” is a great introduction, featuring all the band’s strengths in a song that clocks in at just short of 6 minutes.  It mixes the chilled and the energetic with dreamy, shimmering synths over sped-up Arabic percussion.  There’s a nice building outro which could go on for a whole lot longer and there’d be no complaints but we have to wait until the closer “A Light” before they go all out hazy cosmic psych-jam.

The use of samples in “Cerulean” evokes both Saint Etienne and The Avalanches but despite the intricate musical details there’s a pop song underneath it all with the vocal melody.

Overall, Living capture a sound in the vein of Washed Out and Vacationer but with their quirky, cosmic elements coupled with the ethnic flavour it’s an EP of five rewarding journeys with twists and turns of depth and value.

Living EP is out now on Spotify

Living on the web: