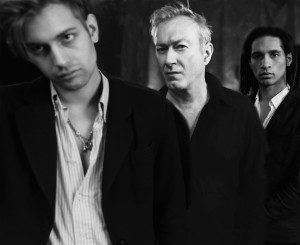 The influence of Gang of Four is undeniable.  A pioneering post-punk band with a funkier, almost danceable sound compared to most of their colder peers, they were nevertheless as serious and as political as their name suggests.  Debut album Entertainment was in the Top 10 of Pitchfork’s ‘Albums of the 1970s’ and their impact has been cited by Bloc Party, REM, The Rapture and Franz Ferdinand among others.

When a well-known band from this era returns with a new line-up, they can often be accused of simply trying to sound like the newer crop of bands that they influenced in the first place.  What Happens Next, their ninth studio album, happily does not fall into this category.  This is the first album without singer/lyricist John King and the decision to include several guest vocalists means that straight away we get an album unlike anything Gang of Four have done before.  The key ingredients still remain though… The trademark sharp, splayed sonics of guitarist Andy Gill are still there along with lyrical themes of conformity and consumerism.

Opener “When the Nightingale sings” immediately surprises, a statement of intent beginning with a throbbing, almost industrial synth bassline.  New vocalist Gaoler (John Sterry) sounds well at home, adding a new richness which bodes well for future releases.  There’s an Eastern feel to the chorus melody and this is a precursor to some of the ethnic elements featured throughout the album.  It can’t be classed as ‘world music’ but often the percussion and mixed vocals certainly evoke a global feel, mirroring the universal themes on the album.

“Isle of Dogs”, an album highlight, echoes the consumerist warnings of older Gang of Four songs like “Damaged Goods” with lines like ‘I buy into everything I see’.  In the same song, the literary allusion to the ‘Sweet Thames…’ a line from T.S Eliot’s The Waste Land (itself an allusion to a line from poet Edmund Spenser) keeps the torch burning for the notion of urban decay.  It seems symbolic that the Thames is depicted, as well as all images on the sleeve art, as a monochrome grey.

There’s an ominous air to some songs, none more so than “Dying Rays”, where the vocal by Herbert Gronemeyer adds a mature, vital warning tone.  From sex texts (“England’s in my Bones”) to social media obsession (“Obey the Ghost”) we are more reliant on the trappings of consumerism than ever before and this is a widely explored area here.  There is no question mark in the title What Happens Next which, as well as a reference to the band itself, suggests an inevitability over where we are headed and when the original themes of Gang of Four are still prevalent in society over 35 years later then who are we to argue?

There are still funkier, danceable elements despite the gloom.  Alison Mosshart (The Kills, Dead Weather) guests on two songs giving a slightly more commercial feel to the songs.  Despite the prominence of a female vocal, there is still enough blaring guitar to make it Gang of Four-like and with a bit less polish in the production you could hear how these songs might have sounded stripped back alongside their earlier work.

The album works in addressing both the local and the global.  Andy Gill talks of the history and importance of London in our forthcoming Fourculture interview and there is an underlying air of nostalgia to the album despite the modern, multicultural themes.  It is similar in a way to the Damon Albarn-led project The Good the Bad and the Queen, an album centred on modern London life mixing the old and the new as well as Afrobeat influences.  The different, diverse vocalists on What Happens Next give the feel of different voices or commentaries but all united in their uncertainty of the modern world.  It’s a varied but focused album and it allows plenty of options for Andy Gill when deciding on whatever happens next for Gang of Four on future releases.

Written By
Paul Davies
More from Paul Davies
We had guitars on Tuesday, now for a pairing of essential electronic pop...
Read More