Ladies and gents, the emotions of electro-glam have been exposed! The boys of NYC’s Naked Highway (Sy Boccari & David Lee Rotten) let us have a peek at their latest video for “Cause This” — a truly un-Naked Highway sound showing evolution of the band ready to expose their more emotional side. The single is already making waves and is bound to be making a splash in clubs around the world. In honor of the release of the new single we sat down with Sy and David and discussed music, their new video and a few extra tidbits that only Fourculture could ever ask.

You’re new single “Cause This” really isn’t the standard Naked Highway sound that your fan base would come to expect with a more power ballad edge.  What sparked this new power ballad sound/edge?  What do you like about the sound/edge of the song comparatively speaking to your other songs?

SY:  I think it’s important for every artist to show that they have range.   Naked Highway will always be about sexual innuendo, hot beats and dance grooves, but that’s not all we’re about. “Cause This” fits perfectly into our discography.  Much of our music has a retro-yet-modern vibe that “Cause This” possesses as well. Plus it will be nice to have a song were we can stand still when we perform it live.

David Lee Rotten:  Sy brought me the demo of “Cause This” and I flipped.  I grew up listening to my mom’s records and tapes of singer-songwriters and soulful artists from the 60s to 80s – “Cause This” has meaningful, painful and beautiful lyrics on top of a really melodic tune.  It spoke to me immediately and I started hearing the interesting harmonies and coming up with the arrangements right away.  Honestly, I was unsure how a powerful ballad like this would work for Naked Highway, but I thought fuck it!  We are Naked Highway, and we need to express whatever we feel.  In the end, I think that the track fits well in our catalog.  And like Sy said, anyone who has seen a Naked Highway live show knows that we really do need a break when we can stop jumping around and just sing our hearts out.  It’s all the better that our fans have reacted really well so far to this more personal song.

SY: That’s an awesome interpretation!  I wrote the song a while back with one of my best friends, rapper/producer BNS from Dublin.  We were trying to create that sort of optimistically melancholic type of song you’d hear in a John Hughes movie.  The song speaks to the goth in me; I was a total goth in high school, complete with black eyeliner and Siouxsie & the Banshees t-shirts! I’ve always been self-conscious about writing something a bit more serious.  I write sad moody songs all the time, but I’m so afraid to show them to anyone. With “Cause This” I realized that I could convey a fairly serious story while keeping the lyrics simple and direct.  The funny thing about the song is that I didn’t really experience any traumatic break-ups until long after the song was written.  It’s very eerie when you think about it — to make up a story and write a song — and then it happens to you.  I know my EXs are going to hear this song and think it’s about them, but it’s NOT, so y’all can relax. You heard it here first! Ha ha!
As far as advice goes, I’m going to let David handle this one.  I make disastrous decisions when it comes to love and relationships!

DLR:  I think that most people can connect to this story in some way. I have been dumped, and I have broken up with others.  I have still been in love with someone after they are gone, and it was the most painful feeling I’ve felt.  It’s the sort of feeling that slowly fades away, but it’s never completely gone.  Even now that I’m in a wonderful relationship, working on “Cause This” made me recognize how much hurt I have endured in the past, and how much I have probably caused.  My trick to not dwell on that hurt is to truly believe, love and cherish myself.  Like RuPaul says, “If you don’t love yourself, how in the hell you gonna love somebody else!!!  Can I get an AMEN?!?” 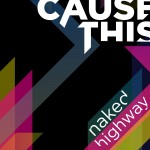 You guys are kings in the remixing world.  Could we expect any “Cause This” remixes from you guys upon the release of the single?  What would you like a remix for the single to sound like?

SY: “Cause This” is actually the strongest remix package we have ever put together.  I love when a ballad song gets remixed, because it adds a whole new dimension to the song. We met producers Jared Jones and The All Nighters from working on “The Chop” remix project by Manila Luzon & Latrice Royale of RuPaul’s Drag Race fame.  Both of them turn “Cause This” into a full-on club track.  There’s also a remix of Devin Tait, from the bands Shitting Glitter and Devin Tait & the Traitors, who actually made the song even more New Wave sounding.  His remix sounds like Terri Nunn & Berlin covering the song circa 1982.  There’s a great deep house mix by Chicago producer Eric Daly, who also remixed our previous single “Touch Me” and then David and I each provide a remix.  All in all, it’s a diverse collection of remixes.  I’m so proud of it.

You guys were awesome enough to give us a first look at the video for “Cause This.” How was it for you both directing separate segments of the video? Were there any creative difficulties in splitting the direction?

SY: To be honest, I love it.  I’ve directed the last couple of Naked Highway videos and it’s pretty overwhelming to create the audio and then produce the visuals too.  I’m glad David, Stephen and Gustavo stepped in to co-direct and edit the video.  I couldn’t have done it alone.

DLR:  I have been having fun exploring my inner film director – on a recent shoot for a future Naked Highway video (in a sex club, no less!) I found myself directing for the first time, and loved making the decisions and telling everyone what to do.  If I ever leave the music industry, I have a feeling that I’ll be doing something where I tell everyone what to do!  As far as this video, I think that we started with a basic idea, and then we were able to bring out more nuances and really tailor the video to the dark intensity of the song.  Gustavo Bendotti’s amazing editing and really cool effects brought it all together beautifully!

It has been a while since you released a proper album. Now with the release of “Cause This” would we expect an album in the works? Is there an evolution in the sound or more experimentation we can expect out of you in future releases? What can we expect out of the 2013 Naked Highway that we haven’t seen in years past?

DLR: We have a lot of music in the can – I joined Naked Highway relatively recently, having co-produced part of the last album.  Sy and I have been working together as partners and finding our unified sound over the past few years.  We have a lot of amazing stuff, and some really fun stuff that may be on a rarities project in the future.  I think that the fans are going to really enjoy our next full album now that we are really in a groove together, making melodic, fun, sometimes dark, and slightly more mature dance pop music.  “Cause This” is kinda dark, but it represents our collaborative sound.

SY: The music industry as changed so drastically in the past decade.  Because of digital downloads, we have gone from an album-centric music buying public to a single-centric one, much like it was in the 1950’s & ‘60s.  And now with Spotify and Rdio (Naked Highway is on both), the idea of music ownership is one that may not exist in a few years. We’re definitely going to put together a new album soon, but we’re going to release several singles first. One thing I will reveal, as evidenced by “Cause This,” is that our next batch of songs will feature more organic instrumentation.

You go by the name Naked Highway and live up to the moniker quite well. Yet, we got to know. Who are the top 5 people you’d like to see naked?

SY: I think I’ve seen everyone naked that I could possibly want to see naked.  Is that weird?
DLR:  You can send me your pics in a private message!  😉