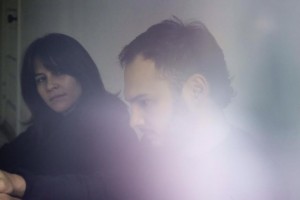 When a band is great, the world will take notice. LA based synth pop duo Motion Cntrl hasn’t even released their self-titled debut EP yet (due out August 21st) and they have already captured the attention of the World Wide Web. In anticipation of the release of their new EP, Motion Ctrl has released their latest single “Messenger” which is sure to set them into cruise control to superstardom.

“Messenger” is the chillest song you’ll ever put on this summer, the perfect time to relax and put on a good tune. The song really has a dark feel with the lyrics going over how you don’t want your ex to forget about you as you go your separate ways. With the line “I wish you could see what is real, and feel enough to stay” it feels as if there are two different perspectives to the relationship; one of misunderstanding and loss that ended the relationship, and one of positive memories and not wanting to let go. The latter is perspective of the vocals. The best part about this song is that it isn’t overwhelmingly depressing with a creepy come-back-to-me lyric, but it reminds us to remember those we had a good time with or changed you for the better as you move forward.

Written By
Serena Butler
More from Serena Butler
To experience the emotion of the beach bum life is one that...
Read More