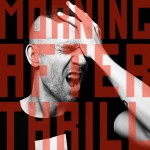 “Morning After Thrill” is the latest release from aMINUS, the solo electro-pop project of Berlin-based Valentin Plessy. Although better known as a founding member of dance-clash ensemble Plateau Repas and the drummer for the hypnotic electronica band Kool Thing, aMINUS is where Plessy creates a crisp electro-pop sound that reverberates with the echoes of 80’s house, synth pop, R&B and 8-bit music.

“Morning After Thrill” is the third single off his second full-length LP Options, and the track helps to weave the album’s narratives on gender and love in the chaos of everyday life. Options (Mad Dog & Love Records) is a reflection on the expectations and uncertainties that follow the demise of a chaotic relationship and “the constant need to (re)create one’s identity in a world where rules and etiquette are omnipotent.” For its part of the journey through a broken relationship, “Morning After Thrill” cleverly addresses the issue of the narcissistic and shallow lover with its commentary wrapped in a catchy chorus and charming dance beat: “You are nothing, if I’m not looking at you.”

In addition to the single, two remixes – by Electrosexual and Stereon (a.k.a. Mark Hardbone) – as well as the official music video have also been released.  So click on the links provided below and discover the music of aMINUS – where the lines between pop and club music are blurred by a nice, danceable beat, some clever lyrical snark, and dollops of deliciously ferocious revenge-filled fantasy.