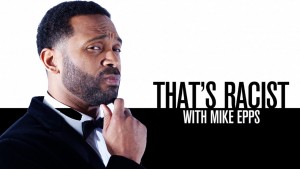 Jews and Money. Asian Drivers. Polish IQ. CPT…that’s racist! But where do these stereotypes come from? Comedian Mike Epps explores the backstories of this humor and how history and fact often distorts into a snide – but sometimes funny — shorthand. The ten-episode comedy series — to be launched in two groups of five installments each — will feature Epps interviewing those on the receiving end of the jokes while garnering input from educators as well as witty roundtable conversations on the topic from comedians Randy and Jason Sklar, Helen Hong, Rick Overton, John Viener and Sharon Houston.

The first episode of “That’s Racist” finds Mike Epps heading to Oakland to get to the bottom of the age-old mystery: Do all black people love fried chicken? He’ll also aim to uncover why that’s considered a negative stereotype. Mike visits a Jewish deli in the second installment to explore the background of the stereotype that Jews are cheap. During episode three, Mike examines the seemingly accepted belief that Asians are terrible drivers by hitting the road with an Asian driving instructor to see what is really going on behind the wheel. Mike spends the fourth installment tackling one of the strongest stereotypes in society today — that all Muslims are terrorists — by investigating how that perception has affected the community. In the fifth episode, Mike explores the adage, “White men can’t jump,” by seeing just how hard they actually can ball on the court.

Catch episodes of That’s Racist with Mike Epps on AOL On Originals.