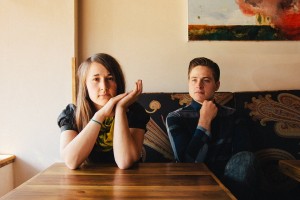 Mideau (pronounced Mid-o) formed in 2012. Libbie was a solo artist whilst Spencer was a part of another band, Fictionalist. In 2013, Mideau raised $10,000 via Kickstarter and finished their album. Yet, after releasing their debut EP Way with Words in January 2014, Libbie found out she was pregnant with her first child and Spencer then moved to North Carolina with his wife. Their life has settled down just a bit since then and thanks to technology Mideau has found a way to make their music work despite being states apart. Finally, their full length debut is slated for release April 21.

The track “Maude” is inspired by the memory of vocalist Libbie Linton watching a house burn down in her neighborhood. The song carries you through the memory with an airy atmospheric pop melody that throws you right into the front seat of what happened that day, very immersive in its lyrical quality and haunting in its melody. I couldn’t imagine being six at the time and seeing something like that.

The song comes with a moving picture book-style video. Adding to that dream-like quality of the song you are met with wooden paneled walls and perspective changes that really entice the viewer. A personal favorite part of the video is when Spencer J Harrison starts tossing a ball to himself whilst positioned on a painting on the wall. Each little panning of the wall has its own story to tell.  In another interview Linton stated that the inspiration for the video came from the aesthetic of the album that arose from the location they stayed whilst recording the album. Using the continuous pan for reinforcement of song themes. Its as if we’ve entered the minds eye of the creator before the album has even hit our ears. I look forward to see what is to come from Mideau with the upcoming release and seeing how the album and video tie together.

Mideau On The Web:

Written By
Serena Butler
More from Serena Butler
Good electro pop is more infectious than the common cold. Today we have...
Read More