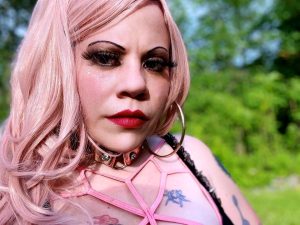 Reductive Nostalgia is Nicky Click’s new album that has been in the works for some time, and after enjoying videos and live streams over the past year, the whole shebang is finally out on vinyl and digital on Disc Drive Records!

You might already be familiar with Nicky if you saw her on tour with The Gossip, Lady Sovereign, or Brooke Candy; as for me I discovered her colorful visual art and songs thanks to From Disco to Disco Eric D. Clark and Cindy Wonderful from Scream Club, and I was delighted to have this little interview chat with her.

Nicky, you have been releasing your album bit by bit. Was nice to see it come to life one song at a time!
Yes, this trickle process of two years has been so much work but also oodles of fun. It has been a technical learning curve for me to work remotely, recording, doing some production, and so on, but we got there. I worked on producing this album together with Mickey Pollizatto of Portland, we are long-time collaborators and friends.  The most fun part was making little videos to share with the world and little art projects about the songs too. Also, I started a live project to experiment with these songs performing online. All of this work was happening simultaneously throughout the quarantine and Covid, so it just made sense to be locked up making music anyways. Now that this is finished, there are actual professional music videos and songs, and I still do live shows on Instagram, but it is more cohesive.

Would you say this is your most personal album yet?
This album is most definitely the most personal album I’ve ever written. I have a song about being a survivor, a song about mental health, and substance abuse, and a song about my partner whom I love. This is more specific and easier to “read” than my past songs on other albums… maybe less fun. New songs like Ghost in the Attic and Life Cycle are most certainly to be spoken to the world and I want that message out there; it is also very much my own personal diary that I am sharing with the world, but I want people to take something from it, if possible, that is soothing or validating. It’s not just for me. It’s a world diary!

How did all the videos and the collaboration with your label come to be?
I love doing music videos, I love performing, I love dressing up, and I love being a diva. I’ve been that way since I was age 3. Naturally, it makes sense for me to be in front of a screen, so I went to Baton Rouge this past winter 2021 and made five music videos: several with Cindy Wonderful, one with locals Rocky Mountainz, and one with local Arthur Got Beats. I enjoy the process of storyboarding scenes with directors and seeing different people’s visions for songs.  Disc Drive Records magically came into my life around that time last February in Baton Rouge. This awesome group called the Fempire Records introduced me to the ever-amazing Disc Drive Records out of Seattle run by Nick Ripley; I approached them and the rest is history. 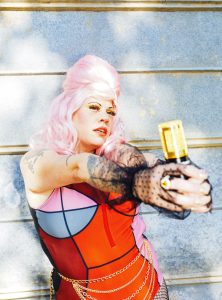 And how did you get inspired to work on this album? I thought there might be a certain Peaches, Dynasty Handbag, or Chicks on Speed flair.
I am inspired all the time. I could sit down at any moment and write a song. I love writing songs; I don’t need any external inspiration. I just need a beat that I’m inspired by and lyrics come to me right away, I’m very blessed like that. But I very much admire all of the performers that you have mentioned.

What do you want this album to be once it is released, and what are your plans for the near future?
I hope that it can be a sort of time capsule for the life and times of quarantine and Covid as it was created then and has songs that talk about that. I also wish for it to be a work of art for survivors and people with mental health problems to reach for hope! And I’d like it to be accessible to all, I plan on having it up for free streaming on SoundCloud too. As for future plans, a Teenage Lifestyle single remix tape by VooCha, then a Best of Nicky Click album, and after that a Nicky Click concept album… and it just goes on as we’re going to just keep putting out albums. There will be a Disc Drive tour this fall on the East Coast of the States with Tami Hart, and I will be playing a queer festival called Stargaze in Massachusetts on August 26-28. Look out for more!

Tune in Nicky Click’s Youtube channel for more videos, and get the Reductive Nostalgia album out now or stream it via Disc Drive.

Written By
Nadia Says
More from Nadia Says
Heal Her is a global and interactive project headed by Lena Chen...
Read More