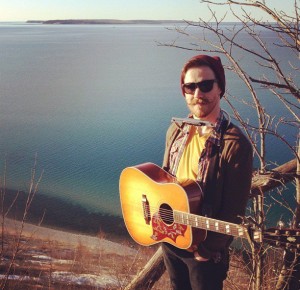 An artist who has been around the world has seen many things and clearly has a story to tell. That is no problem for the Saginaw, Michigan born artist American Opera, who was transplanted to New York City by way of a short stay in Chicago.

On July 2nd the project, led by John Bee, released their second EP entitled Your Songs. The project started roughly nine years ago after his last band ceased to continue in 2011. A departure from the sound he was used to playing with the band he had left, American Opera brings the sound of a true indie folk rocker to your ears.  The album is a very Modest Mouse meets Ben Folds sound, accompanied by vocals similar to Dave Matthews or American Idol winner Phillip Phillips.  Your Songs would be best described as a road trip EP. Imagine your windows down, the wind blowing through your hair, whilst you’re driving through the hidden sights and stopping for the terrible tourist traps out there.  You know the ones: see a real mummy in the middle of the US plains, which you know is clearly impossible.  With the sound of the folk/indie scene becoming heavily popular again with the emergence of Phillip Phillips, there is a good chance that American Opera could catch on.

When you first take a look at the album you see a cover that is just a stamp on cardboard. A real indie artist who does it themselves uses stamps. Seriously though, this is an album that has powers to transport you to another place. The opening track “Shorelines,” with its truly descriptive lyrics, takes you from whatever place you’re in and shows you so many visuals from childhood, recalling slumber parties and picking pumpkins. There’s a feel-good element to the lyrics, letting you know there are people who love you regardless where you go.  There is really no song on this album that has a negative element to it; this is a positive outlook for a world where we’re constantly consumed by negativity in the media.

One special shout out on the final song on the EP, “Ann Marie.” The song is a beautiful tribute to the mothers out there. It’s a very emotionally driven song with a story unfolding right between your ears. I’d be lying to say I didn’t start crying when the story of the mother’s death started to ring. I’m sure wherever those mothers are, they’re all proud of their children. John Bee’s mom would be proud of that one for sure.  When it comes down to it, Your Songs is a trip everyone should take.

Find American opera on the web: