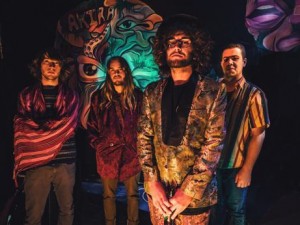 What’s in a name?

A candlelit dinner, soft lighting, an amusing joke about the state of the nation. This date is going swimmingly and all that is needed now are some tunes just to send it over the edge.

“What are you putting on?” he/she/small amorphous blob enquires.

And they all lived happily ever after.

Whatever you think of the music, you have to agree that this band is worth checking out on the name alone! A name that conjures up such exciting possibilities (not in that way!), that the collective sound made could surely only lead to disappointment. A name that sounds like the more adult brother of the Teenage Mutant Ninja Turtles. Now that would be an interesting cartoon superhero movie. However, as much as I would like to wax lyrical and discuss whether crumpets could wear capes and what exactly crumpet porn would entail, let us sit down to some bread and butter.

The album consists of ten tracks, clocking in at around 47 minutes. If you feel put off by the psychedelic moniker don’t be. Yes, these tracks have all the psych tropes but are honed in from exuberant excesses. There are no instrumental wig outs flowing over the horizon and into the next universe. It is melodies that are at the fore here, never once is experimentation allowed to smother the tune in any way. That is not to say that the resulting tunes are boring, more that there has been the honing and tightening of a very skilful editor at work. We have an experimental sound with a pop album sensibility.

As the album title implies the tunes have an instinctive quality. There is a high energy feel, certainly not an album you can sit still to. The kind of noise that would have you moving around like a loon as the musical wave carries you along. It is a hair wrecker should you be lucky enough to still be in possession of your own. An upbeat journey of musical exploration. The album contains the two singles “Cubensis Lenses” and “Marmalade March”.  If you need a comparison they sound to me like a mix between the Mars Volta and White Denim, with added echo and that has to be intriguing, right?

Written By
Mark Simpson
More from Mark Simpson
It is a gloriously hot day…. You decide that there would be...
Read More