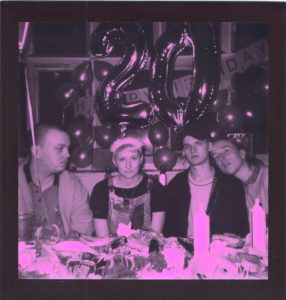 Yesterday we featured Bristol trio Soeur and their 90s alternative-influenced sound.  There must be something in the water as Hannah’s Little Sister have emerged with a similar vibe, wildly channelling the likes of Sonic Youth, The Breeders and The Pixies on their debut release “20”.

It’s a chaotic yet commercial introduction to the Liverpool band.  “20” is about hitting a new decade after those teenage years and the pressures of expectation, identity and stereotype.  There’s a alt-rock, slacker pop edge to the music and the lyrics are delivered with a brattish swagger: ‘I can’t do nothing about it/stop making me panic/promise that I’m not just lazy’ sings Meg Grooters about her ‘post-teen crisis’.

The accompanying DIY video, directed by Beebo Boobin, shows the band at a birthday party surrounded by retro party goodies and will make you want to indulge in cake as well as quality music.  Treat yourself.

Written By
Paul Davies
More from Paul Davies
There’s been such a lack of innovation in guitar music recently that...
Read More