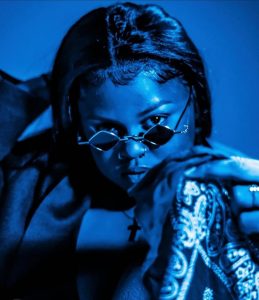 I first discovered Tiffadelic, aka the Princess of Darkness, through the fantastic We Found Hip Hop network, and fell into her Soundcloud rabbit hole. Her way of mixing hip-hop and rock influences brought up some 90s nostalgia, but at the same time, it all felt new… each track is different, yet her style and thematic are always recognizable. In the past couple of years, Tiffadelic has expanded beyond her original Detroit circle and has worked with several Berlin artists, and no less than three of these collaborations have found their way on the Detroit x Berlin compilation, released on the label Springstoff. For the occasion, Tiffadelic has answered a few questions and has prepared a special Detroit underground mix to air on January 21 and 28, plus February 4 and 11 on fourculture.com/fcradio at 7PM EST, don’t miss out!

How did you get inspired to create this sound and your persona?
Hum… been inspired by various artists growing up such as Jimi Hendrix, Grace Jones, Jim Morrison, Kanye West and many more. The looks, fashion, and sound are all fusion from nostalgia and the result of turning a lot of my inner creative thoughts into a visual, or a vision from my imagination.

Is Detroit important to your artistry?
Detroit plays a major role in my daily artistry as I’ve connected with many artists through the underground scene and I do attend various music events here in Detroit. I started performing in Detroit in 2018, and I am currently branching out to different cities with different kinds of music crowds. 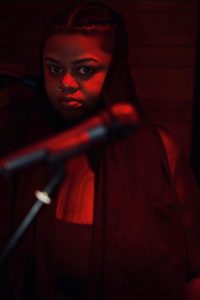 Ah yes, you released some remixes with artists based in Berlin?
Yes, it was an electrifying experience collaborating with artists such as Strip Down, Malonda, and 6zm in the EXP__ context. It’s wonderful to work with people all the way in Berlin – where I eventually want to work in person. I am very thankful for those experiences and looking forward to possibly working with these lovely individuals in the near future in person.

Your last output, Hypnosis, had a psychedelic twist…
I’ve been working with an artist named Dave Menzo who has really inspired me to tap into the psychedelic imagination realm again within my head. I feel like I haven’t put out a lot of my pure psychedelic thoughts within my head into my music. It’s coming up though, very soon.

What are your plans for this new year?
Near future is looking pretty busy. I am hoping to release an alternative punk album and some psychedelic stuff. But who’s to say… the vibe changes every day. Definitely more live music, covers, and live instruments. I’m hoping to reach the grounds of Berlin and Istanbul next year. Lord willing the pandemic really starts to die off in 2022.

Written By
Nadia Says
More from Nadia Says
This is nothing new. Say you are an old bunch of men...
Read More