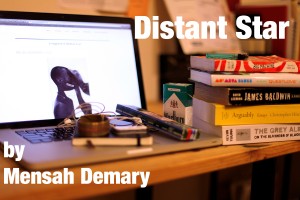 There is a missing chunk of time, an unpublished, but quite documented (in detail) story, involving me, my black 2008 Mustang, and the network of American interstate highways stretching westbound. I drove for over a week, leaving the eastern seaboard behind, and through conversations with various people—some I consider to be friends, others I consider to be dead to me—I’ve dispersed the entirety of the narrative into tiny pieces of memory, bite-sized treasures, in the hope, or dread, that these people will meet and piece together the puzzle of that week in August, 2012. I shared the most with Alicia (considered a friend), but this piece isn’t about what was discussed. I only mention my secret western adventure to grab your attention. We now return to Brooklyn, circa 2015 AD (After Divorce).

Life in Brooklyn is a series of meetings and get-togethers connected by patience, or lack thereof, as one endures New York City’s mass transit system. Sunday in September, the summer heat still shitting on me, my iPhone told me I needed to be at point X by Y time in order to meet Alicia at Z hour. In the black cab, I knew I was already late, despite having approximately 45 minutes left for traveling. 45 minutes means nothing when you have to take a train to Atlantic Avenue, then walk a few blocks, take another train, transfer to one more train, then walk. I hate being late. I hate making people wait. I hate the city when I have somewhere to be.

A subway ride, coupled with precious air conditioning and earbuds adorned as survival garb, elicits a meditative effect, particularly when one is already late. (Why stress about lateness when lateness, though minutes away, has already occurred, and you’re yards below street level, far from the reaches of cellular signals?) On the G, I closed my eyes and breathed in the cold, stale train air. Like that, the thoughts rush by. Thoughts of love. Thoughts of love lost. Thoughts of love stumbling into your sense of serenity with the mask & gun of a burglar rousing danger. Thoughts of money. (Need more.) Thoughts of people’s stupidity and passive-aggressive drama. (Need none of it). There’s nothing else to do but let the thoughts rush by. Look out the window and you’ll see darkness and glimpses of concrete.

Walking through Bushwick, I think about Roberto Bolaño because it was Alicia who, years ago, introduced me to his ghost, his words. Streets switch from one-way to two-way traffic and I avoid getting hit by a beat-up Honda as I think about Bolaño, specifically the novel 2666. I’m at a dead stop in the book, slowly working my way through “The Part About The Crimes,” which is a mechanical, 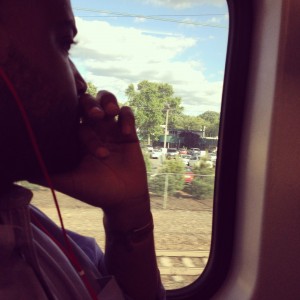 cold, relentless detailing of women violated and murdered in Mexico. The writing is so even, so indifferent to the content, that I’m forced to respect the mastery, the craft; the murders beg for maudlin, over-the-top language and Bolaño refused to abide.

My iPhone is in my hand, its old, pathetic battery slowly choking to death by GPS, and I make one turn up a block, then another, and I’m mad at myself for being late, and incredulous that I’ve taken so long to complete this part of 2666. Why incredulous, since I’ve known about the book for years, and avoided it for just as long, in part because of the tome’s size (800+ pages) and, specifically, because of this one part, this dreadful exercise, dive, into seemingly hundreds of murders?

Because I expect more of myself as a reader. I need to finish the part about the crimes, then move on to the last two parts, and consume it all, and allow all of it to rip me apart. I need new literary challenges. Alicia knows this, respects this, lives by the same philosophy, and this is why I’m angry for being late. My friends—the few I have—deserve more from me than lateness. I deserve more for myself than the consumption of dreadful art. I deserve more from literature. I wish Bolaño was immortal, and he is, in a way, but not really. Not really. Never.

I still need to finish Bolaño’s Savage Detectives, and Antwerp, because, like Octavia Butler and James Baldwin, I savor the words of dead geniuses. I am deathly afraid of loss, although loss is all there is, in the end.

I arrive; praises to White Jesus are offered as I walk into the open-air eatery and find Alicia. Apologies and self-recriminations abound. I’m so sorry for being late I hate being late I tried to get here as soon as I could but I waited so long for the G then I had to switch to the M but the M wasn’t running so I switched to the J or maybe the other way around I’m so hungry.

I order my food. I return. I sit down and Alicia asks, “Where were you coming from?” and I offer the truth. “Really,” she asks with a smile. I reply, smiling and still slightly out of breath, “I was with a friend” and the friend hangs in the air, bracketed by air quotes. I hate being late, but sometimes lateness can’t be helped, and she asks “Had a good time?” and I nod and respond with a terse, cool “It was cool.” I am translucent, despite my best efforts, but—why hide? Friends beget vulnerability, or at least an open heart, and happiness is a nuclear, celestial event bursting forth from flesh, so—why hide? Because I am not used to friends, to openness, to extroversion. Evolution demands more of me, so I abide while changing the subject to The Mars Volta, now renamed Antemasque, and the concert we’re likely to (I did not) attend in November. Let the music rip me apart, and piece me back together. I’ll be late for that, so said Kanye.