Raja, the winner of Season 3 of RuPaul’s Drag Race, has just finished her run in Provincetown, Massachusetts perfecting her new live show, Masque.  She took time out to discuss the creation of this show which she will be bringing to NYC on September 14th and 15th at the Laurie Beechman Theatre  She is determined to have the audience leave with their hopes restored and feeling positive. 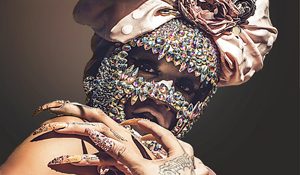 Provincetown is a very different environment for the native Southern Californian although it does share the trait of  “allowing the freedom to do whatever the fuck we want and people leave you alone”. However, Raja went on to explain that Provincetown has something more.  In this New England gay mecca, many of the well-seasoned icons like Varla Jean, Jimmy James, and Coco Peru are there not only to perform but to help their fellow artists.  Raja’s own explanation of this experience went like this.

“Provincetown is where I test it all out. I’m new to this. I’ve been doing drag for many decades now. I won RuPaul’s Drag Race and had many amazing accomplishments. Doing a local show is something I am inexperienced at. This summer was grueling and there were moments when I thought ‘fuck this. I don’t want to do this ever again.’ But now I have a whole new energy, a whole new fire.  I’m addicted. I like the idea of controlling a space and an audience for at the least an hour.”

“Here is a safe cushion.  You know if you have a bad night at least the next morning you’re going to have a sunny day to fix it on the beach and then figure it out the next night.  It’s a discipline. In the conversations I have had with Varla Jean Merman, what she said to me is ‘Provincetown is one of those few places in the world where a drag performer can perfect night after night after night.’  We’re a family here. A group of people that are supportive and provide productive criticism to make it better.”

This veteran drag queen appreciates all the audiences she has been performing for this summer.

“This is a vacation town Not everyone that comes to my show is completely aware of who I am. There are those nights that I have to do my show for three bridal parties and a sprinkling of f**s.  It varies each night and you have to cater to those ideas. The advantage I have is that I’ve worked in bars for so long I know how to control that. I know how to accommodate and tailor it to each audience.  This show is very organic.  A lot of the performers here are “Oh yay I have a roomful of bridal parties” and I’m like “Bring on the bridal parties!” It’s fun in that way.  It’s an artistic discipline here.”

There is no question to those familiar with Raja and/or her alter-ego Sutan Amrull that both are true artists in every medium they create. In regards to herself as a drag artist, Raja said, “I’ve lip-synced for my life for decades and I’m tired of lip-syncing for my livelihood I like to do something that really tells a story.  I learned it from someone but I don’t remember who right now, our job as artists is tell a story. It can be a story that is abstract or surreal It can be true to life if can be photo-realistic but ultimately you should tell a story.  If you’re not telling a story then you’re not an artist you’re just a person who is regurgitating the same ideas over and over again. It should be clear that not every drag performer is an artist. Just because I know how to make spaghetti doesn’t make me a fucking chef.”

Looking back to the conversation we had five years ago, I asked Raja if her talent for costume design and creation will be part of this show.

“That it is a given. I know how to sew. I know what my strong points are and that’s one of them. I can at least look great.”

Masque is the spark Raja had been looking for.

“I’m bored with drag. If I lose interest in something I’m going to walk away from it. But before I walk away from it I’m going to put everything I can into it. It’s been a passion of mine doing drag. But now I need spice it up. It’s like being married. You can’t just fuck in missionary, sometimes you have to fist a little. Keep it interesting.  It’s my own path, my own journey and I don’t want to compare myself to anybody anymore.  I have my way and my style and elaborate on that.”

Tickets for the New York City shows can be purchased here.

The show will head south to New Orleans in October.