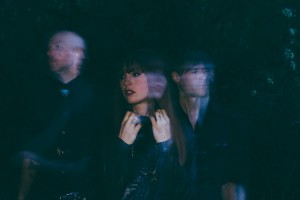 While their 2012 EP, Kitsune delivered a world of colour and promise, this new album goes further with an expansive sound of higher definition, a landscape of soaring guitars and erratic but controlled grooves.

Opener “The Liar” sets the tone and is full of twists and turns. Blurred guitars flicker and buzz and there is an air of sonic dissonance to unsettle and inspire. Time signature changes add prog elements to its shoegaze leanings and the vocals have a hint of Karen O or PJ Harvey about them.

If that whets your appetite then have a listen to “Skin”, the advance preview song for the album. The delicate, Cocteau Twins style in the guitar and anthemic post-punk vibe make it probably the most instant of the nine songs.

Salome is an album full of excitement and urgency and, despite a tendency to throw everything and the kitchen sink into each song, there is also breathing space through the slower passages, particularly in the title track and “Binge” (which still has a pacey bpm). For added variety there is the more conventionally structured “Love, Texas” and the hazy slowed down grunge of album closer “Contender”

With so many changes, the threat of a song exploding in and out of life keeps the listener on the edge. And when you begin to feel they have shown their hand too soon Marriages are just a pedal stomp away from a new place.

Salome is an epic, rewarding listen and it’s out NOW.

Written By
Paul Davies
More from Paul Davies
La Bête Blooms are looking to put Hull back on the UK...
Read More