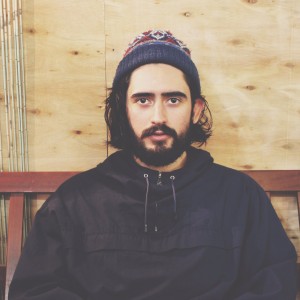 Sydney-based musician/producer Marco Vella unveils his debut album Shadow Mountain, a multi-media collaboration with American visual artist Kyle Jorgensen. This is part musical project, part art book that draws together the connectivity of Vella’s warm, analogue sounds with Jorgensen’s visuals. Released by Berlin-based label Average Negative, it is “a marriage consummated by the ubiquitous resonance of nostalgic feeling that pervades the entire body of work.” Or, as The Creators Project adds, “a sense of synaesthesia – a blurring of the senses.”

Shadow Mountain has been a long time in the making having started back in 2012 as Vella trawled the internet “for visual inspiration to encourage and inspirit my songwriting.”

Opener “Tall” invites us in to his warm, analogue world. Sounds of waves washing and seagulls calling act as an opening embrace. “Why” is a synth-laden landscape. Easy-paced languid beats soothed by soft, warm analogue synths and Vella’s wistful vocals.

There is a yearning, nostalgic feel to the music. A familiarity that enables the listener to tune into the mellow beats and pulses of each track as they warp and wane in and out of the ether. This is ethereal electronica. There are hints of Ulrich Schnauss, Miami Nights 1984 and Tangerine Dream throughout. A definite retro 80’s feel.

“On Set” is a sweetly unfolding blur of sounds and beats with delicious hooks and swirls over an arpeggiated synth lead. “Realities” evolves from strumming guitar and simple bass into synth bass, spacey washed synth pads and tumbling beats as the track builds to its conclusion.

Its introspective, late-night vibe is intoxicating. The album is a memory scrapbook of sounds and visuals. It harkens back to those halcyon warm summer days of endless fields stretching out for weeks. It’s a yearning for a time fondly remembered.

However this is nostalgia, not sentiment. There is a strong wistfulness throughout but without a cloying sweetness. The music moves and shifts between light and dark without becoming overly saccharin.

Comparisons can be made to the cold and lonely alienation of Joy Division while retaining a warmth and lightness evident on album closer “Awake From Noise”, with it’s jaunty guitars, perky percussion and optimistic synth lead. This is a return to earth with a sense of optimism which Jorgensen helps mark in the book by displaying a collage of homely and familiar looking visuals.

Warmer, less hard-edged than Keenhouse, deeper and more soulful than Anoraak, and a calmer, introverted Mitch Murder; Shadow Mountain is an album to dream to, to fall in love to.

Shadow Mountain is out August 14th on Average Negative.

Marco Vella on the web

Written By
Mike Stanton
More from Mike Stanton
July 1986 Ministry have evolved, perhaps more so than many other bands....
Read More