Madness of the Night are Daniel Dante (Sweden) & Abir Blackshadow (Lebanon). Formed in 2011 and based in Sweden their unique style and take on Goth Rock can probably best be surmised in their own words: “When we make music, we focus on our inner voices, this is where the music comes from. There is no inspiration to our music but only the Madness inside of us.”

With the release of The Asgarda they have not only re-recorded and re-mastered some of their previous releases but also written and recorded new material for the album. It is worth noting at this point that when we say “re-mastered” – we mean “mastered”.The previously released tracks that appear on the album have been given a totally new lease on life and this album raises the bar by Madness of the Night into new highs and current fans and followers will both be surprised at the “new sound” and possibly shocked as well.Signing to predominantly “metal” label Massacre Records (Germany) who describe the release as ‘Gothic Metal’ and bringing in Andy Horn (Mortal Love, Darkseed, Edenbridge) who mixed and mastered the album has given Madness of the Night a new lease on life and raised the bar to all new highs. 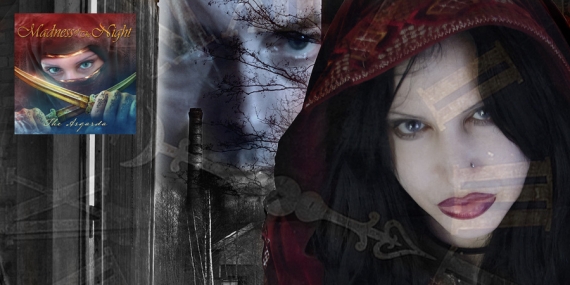 Daniel’s work on the music has been given the treatment it so rightly deserves and his work not only on his guitar playing, but also his piano, synth and programming has allowed his dark roots to grow and flourish. Classic Goth riff driven tracks, with atmospheric backing, create songs written with changes and melodies that are totally recognisable as Madness of the Night. The overall sound may have been enhanced and strengthened but nothing familiar has been taken away, it’s a perfect example of what should happen when a band’s music is professionally presented.

Within all the re-mastering and mixing and production and all that “technical” stuff, what does it actually mean for the songs?What it means is that in balancing the music and enhancing on Daniels work the soundscape allows the power and passion of Abir’s vocal to not only drive the songs skywards but to give her the space to do what only she can do – deliver her message in a way that few can do these days.Singing in English as well as her native tongue of Arabic gives an extra edge to The Asgarda that is both a surprise and a breath of fresh air. Arabic may not be a language familiar to many of us, but in a song like “Theatre of Life”, Abir’s vocal – which is both powerful and yet soft at the same time, meanders and floats over the track beautifully and singing in Arabic just adds something extra special to the song.

“Javla Zigenare” is our pick from the album though. This song has a “wow-factor” to rival any Goth Rock anthem out there. If it fails to get you out of your seat then you may need to see a doctor as you’re most likely dead. If you’re not screaming the chorus after even the first listen then you will be after the 2nd, 3rd, 4th and more as this is a track you will most certainly play many, many times.

However, it’s not all Goth Metal or Goth Rock! “Jephania” or even “She is the Demon” are more or less piano based songs with a true darkness at their heart following haunting melodies and almost operatic vocals. Add to that the slow drive of “Oppression” and the epic seven and a half minutes of “Stand Up” which is not only well written and powerful in its delivery but also a very passionate, dark track – which for us is a song deserving of its length – and you have an album which delivers at every turn within the songs and within every song change.

Madness of the Night have worked long and hard on this album and it shows. Powerful, Haunting, Passionate and Aggressive are just a few of the words that we would use to describe The Asgarda, but possibly the best way to describe Madness of the Night would be to end this article in the same way it started — in their own words: “We Are Goth Rockers And We Don’t Care!”