Loveskills, the Brooklyn based producer, songwriter, and vocalist also known as Richard Spitzer, is a multi-talented artist whose music pushes expected boundaries and defies rigid genre labels. On his recently released EP Pure, he blends diverse sonic elements in unexpected ways to create a compelling fusion of synth-pop and hip-hop that has electronic-infused R&B grooves. And the video for his single “Fine Lines,” directed by Yuichi Uchidais, builds on this idea of making new connections – seeing the familiar in unexpected ways – by using modernist, linear imagery to accompany the track’s scratch work, klaxon sirens, and pop vibes. 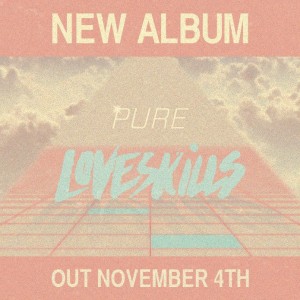 While writing songs for the EP, Spitzer focused entirely on how it felt to sing and perform the songs on the piano rather than relying on computers and studio production. Spitzer also limited his exposure to the music of other artists during the song writing process: “I kept my ears away from new music even if it sounded amazing and especially if it was closely related genre-wise … I would keep everything away in order to give my own music space to be itself.” In this sense Pure is a conceptual album, created with an unadulterated approach to songwriting and production

There is a lot to like on this EP. Though a mere 6-tracks, Pure is like an all-you-can-eat auditory buffet offering sensuous synth arrangements, updated R&B rhythms, dub sounds, electronic beats, pop sensibilities, catchy lyrics, and ethereal vocals. There’s even guest hip-hop vocals. And somehow Spitzer combines these diverse elements to create six tracks that surprise and delight with the unexpected mix.

The lead off track is a low-fi, synth-drenched cover of The Smashing Pumpkin’s alt-rock ballad, “Luna.” It’s a take on the original that I really like, one that becomes more compelling with each listen. Other tracks that I particularly liked included the addicting “White Diamonds,” with its hip-hop leaning vocals, pulsing R&B influenced rhythms, dub sounds and house effect. “Pure Crystal” is another great track. It has an R&B feel, soft dreamy vocals, yet manages to break out a dance beat. And don’t overlook the closing track,“Point Of View.” With its pop-infused dance tempo and dynamite synth sounds layered under ethereal vocals, it is one of my favorite tracks on the EP.