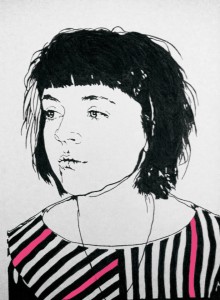 Lovelace is Rebecca Whitbread. She is an artist with an ear for the eclectic, of differing patterns and shifting textures and her debut album Lands showcases this. The album details a period in her life which saw her moving through contrasting landscapes both in the literal and metaphorical. Lands plays like a chronicle of discovery and experience, of opportunities and chances missed.

From the opener “B Man” and first single “Grizzly” there’s a distinct acoustic feel that is tempered with a depth and scope exceeding its constituent parts. Production is crisp yet slightly fuzzed with warming edges and softening tones lending a dream-like haze.

Whitbread’s voice is lilting with enough emotional depth to add credence to the sometimes angst-infused songs. Her instinctive feel for a sweet melody and hypnotic hook drives each song through shifting constructs and moody tempos. Latest single “Moving Train” is a standout with its low-slung vibe and noir-ish feel. Whitbread’s voice is in perfect sync with the backing vocals and nuanced production.

Lovelace displays the poise and swagger of PJ Harvey, an assuredness and confidence through knowledge that the material is strong. At times her delivery has the icy cool kick of LoneLady as her raw emotional energy is conveyed without histrionics or flashiness.

“We Danced” is stripped down to just voice, guitar and bass and is achingly beautiful. Confessional and reflective, it was written in the apartment of her lover as she prepared to board a plane and exit his life, never to see him again. “We Danced” contains many of the elements sprinkled throughout the album; a rawness and introspection that draws one in and subtly haunts the imagination.

In “Fathers & Sons” Whitbread sings of an old friend who lost himself in the woods for a month and left an artwork, in memory of his father, of streams, of bright colours connecting the trees. Spectral in its winsome beauty there is an air of sad reflection and contemplation.

Many of the songs were written in a small rented studio in East London with uneven floors, holes in the roof and and a truly urban vista to look out upon; the freedom of isolation she discovered here encouraged a boldness in the way she approached songwriting.

Live, Lovelace is a 5-piece, consisting of Rebecca Whitbread on Guitar and lead vocals, Hannah Murphy and Ruth Corey on backing vocals, Petter Grevelius on bass and Bernie Gardner on drums.

There is an underlying positivity throughout the album as the chronicles of highs and lows flow past. Lands encapsulates the themes of the joy of freedom, self belief, loss, nostalgia, luck and movement.

Lands is out now and available on her Bandcamp page.

Lovelace on the web:

Written By
Mike Stanton
More from Mike Stanton
Ediblehead are a force to be reckoned with. They fall under so...
Read More