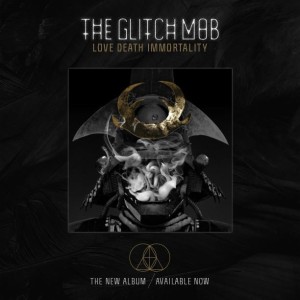 The Glitch Mob drops their sophomore album today on their independent label, Glass Air Records. As with their first album, Love Death Immortality is completely DIY. That’s not to say they didn’t reach outside of the trio to make this record. Guest vocalists include Aja Volkman, Metal Mother, Yaarrohs and Sister Crayon. This album has been three years in the making but that has not had a negative effect on fans patience and enthusiasm. It has been number one in pre-sales on iTunes Electronic Chart.

In press releases, Glitch Mob has said that this album is designed to be listened to straight through. They have definitely succeeded in creating a cohesive compilation with a distinctive beginning, middle and end. From the opening ass kick of “Mind Of The Beast”, which wakes up the listener and grabs their attention by the throat to the truly beautiful closing track “Beauty Of The Unhidden Heart” (featuring Sister Crayon); the classy, white-tied butler who escorts them out the door, it all ties together. Lead single, “Can’t Kill Us” should attract serious attention from people not already fans of the Mob. It has strong hooks and killer drops. “Skullclub” is all about where the glitch in mob came from. Although a longer track, the variety of beats, textures, and effects keep it from getting boring. “Fly By Night Only” (feat. Yaarrohs) would be a great choice for the second single while “Skytoucher” wins for mind/ear/stomach wrenching bass drop. There are ten tracks total and they are all solidly crafter works and should see a lot of continuous play time.