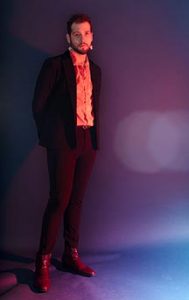 Colorado native indie/alt artist LOV – the moniker of songwriter Ryan Hunt – has shared their debut single “Universe,” available to stream now on all DSPs worldwide. The track is the first chapter in LOV’s debut album Blueboy, which will officially drop on June 10th.

“Universe” was written a few years ago when Hunt was really feeling the melodrama of being in their late teens and early twenties. The lyrics are melancholy and sorrowful with a heavy club behind them – pairing the indie/alt instrumentation of Lorde with the raw, unique vocal delivery of Sufjan Stevens.

“I wanted to feel like I was literally taking off and leaving Earth in a spaceship because there’s no other choice, but make it danceable,” says Hunt on the track.

Combining dark, dreamy alt-pop instrumentals with lyrics touching on themes of gender, sexuality, and mental health, LOV’s music is just as complex as it is catchy. Without learning how to play an instrument, LOV– Ryan Hunt– found their musical footing in the dark digital corners of SoundCloud in 2012. Raised by high school science teachers in the mountains of Palmer Lake, Colorado, the singer/songwriter/producer never took a single music class growing up and began learning how to create music digitally with basic programs like Audacity and GarageBand. Upon independently releasing singles for a few years through their Tumblr page and developing a following, they began creating and releasing entire bodies of work (what they call “demo albums”) as a way to better understand production, arrangement, and writing.

Check out “Universe” below and keep an eye out for LOV’s debut album Blueboy.