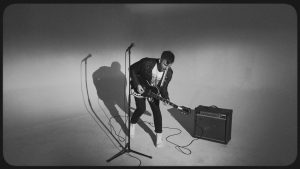 Long Island native indie-pop newcomer Local Nomad – the solo artist moniker of singer/songwriter Michael Desmond – is back with his super fun indie-pop dance gem “On and On.” The track is about pushing through all the chaos life throws your way and getting back to the basics of rocking out with your closest buds. AMEN TO THAT.

Many may remember Desmond from his days with the band Gabriel the Marine, who saw much success in the Warped Tour scene and toured with juggernauts like Glassjaw, Taking Back Sunday, and Jack’s Mannequin. “On and On” was originally written 10 years ago as a Gabriel the Marine song, and eventually morphed into a Local Nomad release.

“My father and my old manager Eddie Levy convinced me to reimagine and produce it,” Desmond explains. “It was definitely a strange and uncomfortable feeling, but then I remembered there are many people out there that have never heard this song. It’s hard to describe what I was feeling when I wrote this song because I was 19. I used to write a lot of songs based purely on instinct, but if i had to put a meaning to it I’d have to say this song is about trying to make it as a band in your early 20’s. We made a lot of mistakes. We were young kids when we used to tour in a beat-up ford Econoline club wagon and now that I’m older the song takes on a whole new meaning. It still feels pretty damn good.”

Local Nomad will continue to release new music for the remainder of 2021. For now, check out “On and On” below.