Horizons, the amazing new album from Nashville based singer/songwriter Kris Allen, is his third as a solo artist and the first to be released independently, on his Dogbear Records.  The Charlie Peacock (Civil Wars, Switchfoot) produced LP made an impressive debut this week at No.10 on Billboard’s Independent Albums chart and No. 80 on the Billboard 200, and rightfully so.

Known for his soulful pop/folk sound, Kris displays a newfound ease and sophistication on Horizons. Looking to artists like Bob Dylan, James Taylor, and Paul Simon for inspiration, the album’s tracks are deeply personal and yet completely relatable.  With simple arrangements and restrained production, the focus of each track stays firmly on the song, the vocals, and on their effortless delivery by the talented and indomitable Kris Allen. 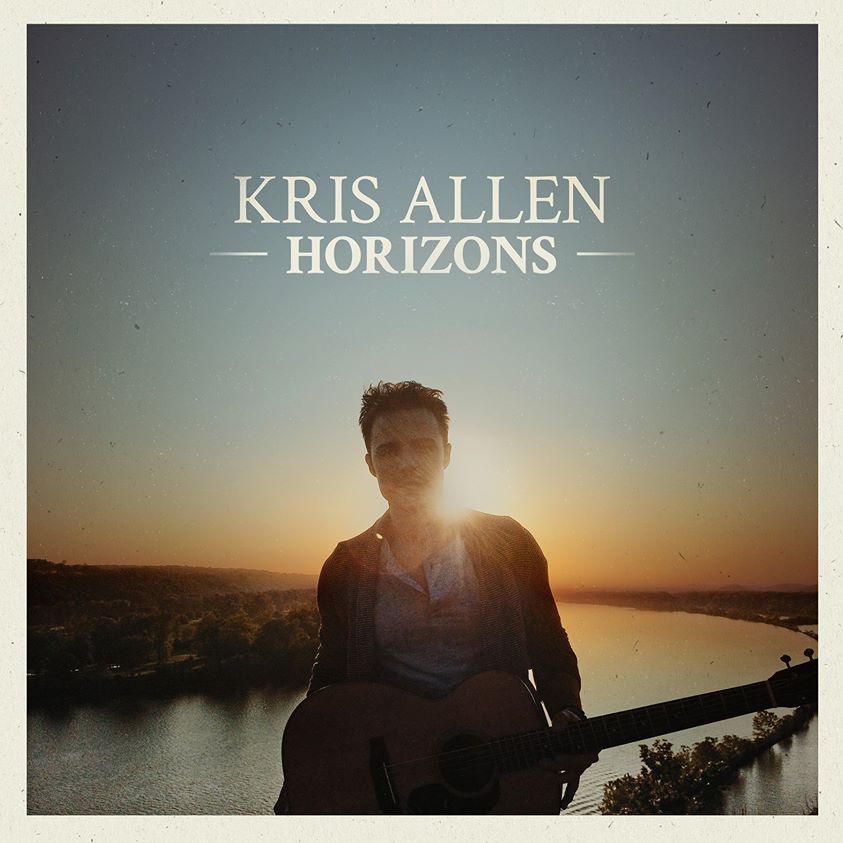 When it came time to write for the album, Kris needed to look no further than the preceding year during which he experienced the lows of a serious car accident and broken wrist, and the high of impending fatherhood. A head-on collision and fractured wrist that resulted in three surgeries, grueling physical therapy and limited mobility was one of the hardest things Kris has ever had to go through. Unsure if he would ever be able to play guitar again, Kris painstakingly re-learned to play using the fingerpicking style. And though unwilling to call the accident and its aftermath a ‘good’ thing, Kris likes the more melodic guitar style featured prominently on the album.

The first track on Horizons features Kris’ new style of playing. “Young Love (‘Paul Simon’)” is an upbeat, breezy and fun track that starts off with a great guitar riff.  It is followed by the lead single off the album, “Prove It to You (feat. Lenachka).”  A gorgeous and intimate song, the minimalist, string-accented arrangement, emotional lyrics, and the smoldering perfection of the harmonies between Russian songstress Lenachka and Kris, make this track a stand out. In order to personalize the lyric video for this song, Kris filmed it in his hometown – with the help of family, friends and neighbors. His idea was to explore the different ways that we leave messages for each other, whether in a note passed at school, a postcard in the mail, or a declaration written in sand.

From its strong start, the album only gets better. With tracks like “Beautiful & Wild,” a song about impending fatherhood (son Oliver is now a curious one-year old), it was the first track Kris wrote for the album and explores the wonder and beauty of our world when seen through the eyes of a child. “In Time” is another standout track. Opening with a syncopated rhythm and sparse arrangement, the song is a deeply personal look at Kris’ struggles after his accident: “Seems like forever since I felt alive/My whole world was shaken in the blink of an eye.”  “Lost” is a moody piano-driven track with a little bit of snark and attitude.  It was written as an answer to those people who always want to tell you that you’re not where you should be or where you thought you’d be.

“Don’t Set Me Free” is a fabulous track. It has a funky, soulful groove that will see couples taking fun, sexy turns on the dance floor. “Parachute” is a love song, the type Kris excels at delivering. The arrangement and lyrics complement each other; at moments stark and painful and at others, full and lush. “You’ve got me falling with a parachute /Saving me from black and blue. You’ve got me floating with the life vest /Both hands on my chest to keep grounded ‘til I can breathe. Don’t you ever give up on me.”  The album closes with “Girl Across the Room,” a melancholy song about falling in love from a distance and the anguish of a potential love lost to inaction.

You can’t help but like Horizons the first time you listen to it. It’s only when you repeatedly find yourself singing the songs out loud as you go about your day or humming them as you brush your teeth first thing in the morning, that you begin to realize you’ve developed definite feelings of love for it. This is an album for anyone who enjoys the effortless musicality and songs of the great singer/songwriters and storytellers like Paul Simon, Bob Dylan, James Taylor and Ed Sheeran.