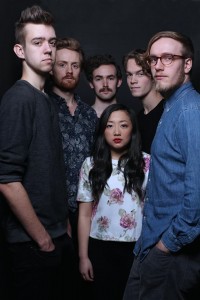 In the latest issue of Fourculture Magazine we had the chance to talk with the young Scandinavian electro pop band Kid Astray about what ahead for them in 2015. Now we’ve gotten a little bit of a look at how their debut album Home Before the Dark (slated for release later this year) is forming with their latest single “Still Chasing Nothing”.

The track tells the tale of the struggles of an unrequited love. Through the lyrics there is a realization that there is nothing there for either person with the line “We were never more than this, we’re still chasing nothing.” It’s as if they are describing the friend zone through upbeat synthesizers and catchy 80s influenced melodies. The toe taping dance feel encompasses the track even though there is negative thoughts expressed with the questioning of “How long will it take before we hit the bottom?” “Still Chasing Nothing” is a song that would make a great international break out track as it has a great radio friendly feel without compromising the sound that Kid Astray has already niched out.

This young band has something very special, an X Factor. With a track like this I look forward to what the remainder of the year brings for the band. It’s sure to be a big one for Kid Astray.

Written By
Serena Butler
More from Serena Butler
It is high noon and the most wanted man in the country...
Read More