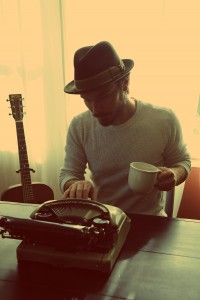 That KaiL Baxley is a major talent is clear from the opening notes of his recently released sophomore album, A Light That Never Dies. Originally from South Carolina, the now LA-based singer/songwriter and multi-instrumentalist effortlessly combines blues, soul, gospel, pop, and rock to create a collection of songs that mark him as an artist on the rise. He is quite possibly about to become your new favorite artist; he is most definitely an artist you want to have on your radar.

A Light That Never Dies is a sonic treat like nothing else out in the music-sphere right now. It is a cohesive, soulful collection that pushes genre boundaries and delights at each surprising turn. Baxley’s distinctive vocals catch your attention immediately with opening track, “Light that Never Dies.” With its folksy harmonica, understated horns, and Baxley’s relaxed vocals, the track immediately announces that you are in the presence of an awesome sound. But before you can settle into that laid back vibe, “Mr. Downtown” opens with a funky bass line and finger snap beat and lets Baxley’s vocals take control, accompanied of course, by a gospel chorus of “whoo’s.” And should anyone still be trying to fit this album into the confines of just one music genre, the retro-sounding, doo-wop inflected, “Tell The Falling Sun,” and the singer/songwriter vibe of “Morning Light” will disabuse them of the notion.

As fabulous as is every track on this album, for me it was the soulful sounds and syncopated beat of “The Ballad of Johnny Steel” and “Better FeelN’ Better,” as well as the atmospheric “Troubled Souls” that let Baxley’s brilliance really shine.  By the time you reach the acoustic “Chasing James Dean,” with its smokey vocals, slide guitar and poetic lyrics, Baxley has you weak-kneed and slightly breathless.  This makes the slight pop vibe of “Mirrors of Paradise” a great choice for closing track.  Its soothing strings let you catch your breath and the catchy chorus has you humming along until the very end. It also leaves you wanting more of Baxley’s magic, and reaching for the repeat button, is a given.

Whether you are reeled in by Baxley’s vocals, his songwriting, or his arrangements, it’s his sheer talent that will make you a fan. This album is a refreshing and exciting release in a music industry focused on radio-friendly, overly-produced, and formulaic hits. With his versatile and genre-blending sound, as well as his uncompromising vision, Baxley has the ability to be added to the short list of soul’s outstanding artists.  Only time will tell if he gets there.  But as stated earlier, KaiL Baxley is an artist that should be on your radar. He is also an artist whose music you will want to hear played often and on repeat.