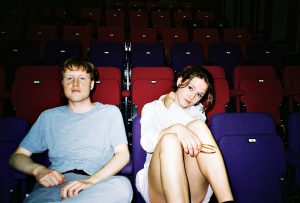 Last week saw the release of Love is the Key to the City, a mini album from Jockstrap that offers one of those rare snapshots of realism, spawning six vignettes that offer a sneaky glimpse behind the curtains.  What lurks there is intriguing yet also painfully familiar…

The band is led by 20 year olds Georgia Ellery and Taylor Skye who met at London’s Guildhall School of Music and Drama and their sound mixes the understated with grandiose intent and ambitions.  It is a bedroom-produced kitchen sink drama that highlights life’s sordid truths, but with a 21-piece orchestra adding lush arrangements there’s an escapism to that grand, fantasy world we would prefer as a soundtrack to our lives.

Love is the Key to the City, is bookended by such scores, almost acting as opening and closing credits.  In between we have an extreme of sounds –  casiotone beats and murky jazz alongside sweeping strings to highlight the vulnerability and bedroom fumblings of society.

It is full of contrasting shades, of repressed colours that yearn to sparkle like neon.  The video for “Joy” is filtered pink, gold, and beige which sum up the ambitions of the music.  These colours represent the naive fragility, the desire for more and the humdrum reality.  This is also brought out with additional beauty via Ellery’s vocal which reflects these moods within the songs’ protagonists.    On “I want another affair” her lounge vocals add a surreal and dreamy air over the warped, bleeping synths.  “Charlotte” is a more difficult listen, sounds writhe and wail, sounding like The Marble Index for the Ableton age.

“Joy” is a song of two halves, showcasing both ends of their musical spectrum and described by Ellery  “as an ethereal and impressionist prelude that cuts to a quirky love rap.”  It is like Bjork’s “All is full of love” interrupted by early Crystal Castles.

“Hayley” is Ellery’s take on Louis Theroux’s 2003 film about sex workers in the United States.  Its warped cinematic feel recalls Sarah Seltmann’s work as New Buffalo. “There’s this prostitute called Hayley, she’s very charming, intelligent, gorgeous.” Ellery explains.  “Louis falls for her – the chemistry is so blatant. It’s about her, and the back story I made up about her.”

These songs are stories, almost journeys and the lyrics are explicit and hard hitting.  Like all good narratives, it is what isn’t said that adds to the power.  The silences in “Charlotte” and the breaths in “Hayley” are also essential to the mood.

The aesthetic of Jockstrap is well thought out yet appears effortless.  Involving friends in the live line up and as stars in their DIY videos creates a world and adds more realism to their art.  This world won’t be for everyone but that makes them all the more engaging.  Polarisation is in don’t you know?  Save indifference for the Top 40.

If you are quick you can catch them at Iceland Airwaves but they are performing tracks from the mini-album with a full string section at St Pancras Old Church, London on 6 December.

Hear Love is the Key to the City here

Written By
Paul Davies
More from Paul Davies
At Fourculture we like artists who take risks and Icelandic DIY-pop duo...
Read More