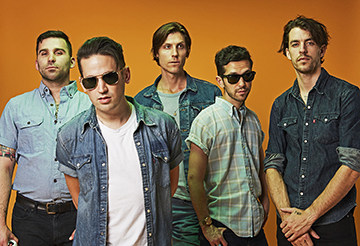 NYC’s heroes of rock n’ roll Jeremy & the Harlequins are rolling out more new feel-good tunes, this time in the form of their new single & video “Nothing Civil.” The band never fails to evoke a feeling of classic rock n’ roll that warms the soul, and this new tune is nothing different. The song was meant as a relevant statement to the political & social landscape in 2016 in hopes that things would improve over time. To the band’s dismay, though, things have gotten progressively worse.

“I wrote this song a few months before the 2016 election and it seemed really relevant at the time,” explains vocalist Jeremy Fury. “We didn’t record the tune until mid-2017. Now it’s the summer of 2018 and one of my biggest hopes, and also fears, was that the song wouldn’t feel relevant anymore. But here we are. I don’t think of this as a political song so much as a song about trying to get along with each other. We have more similarities with each other than differences, and this song is an olive branch to people on every side of every fence.”

“Nothing Civil” will be featured on the band’s new album Remember This, officially out on August 17th via Yep Roc Records. Be sure to catch the band on tour with Chuck Prophet this summer – dates can be found below.

Written By
Alex Rago
More from Alex Rago
The wealth of talent of Nashville continues to be endless. The music...
Read More