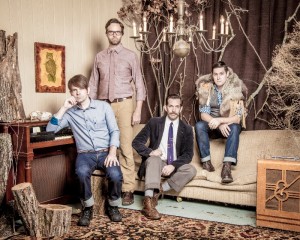 For the Jars of Clay purest the Inlandia-Remix Collection, due for full release on March 4, may take some getting used to.  Let’s be honest, “remix” tends to send brains and ears tracking in the dance music direction.  JOC does have more of a pop affection but they also produce music with lyrics and melodies that make a listener want to sit and feel, not get out and claim a piece of club floor.  So to take those songs down that road, took more than a bit of brass.  Kudos to the producers: JT Daly, Five Knives, SPEAK, flibbityflu, Kyle Rictor and Charlie Lowell who accepted this challenge.

Considering the spiritual foundation of all Jars of Clay’s songs, first thought is that this EPK will offer something different to youth worships and to young adult get-togethers.  With everyone needing to meet their Higher Power on their own level in a voice they understand, this is a new spin on “worship” music that may catch the interest of people who previously haven’t found a musical connection.

Having spent time at church camp for a mainline moderate Protestant denomination, there are also a lot of opportunities for adults to use these tracks in their groups and on an all-camp level. Kids can unwind; dance, play cards, clean up to songs that have a familiar, radio-like, sound while absorbing lyrics with good messages.  During program, especially for arts conferences, these remixes can be great sparks for creative muses.

As far as just the average listener, the familiarity of disco, urban and street sounds would draw them in.  Those who might have been scared away from JOC in the past due to the “Christian artist” classification could find themselves giving the band a chance.  However, considering how much engineering has been done to these tracks, it’s not a sure-thing that they would go back in Jars’ catalog and become regular fans of them.

Again, this was a brave experiment.  Is it a risk that will pay off?  Please listen to the first single, the Five Knives remix of “Inland” now and the entire EP when it drops and decide.  Definitely leave your comments here as the compilation has left this reviewer very curious as to how others will receive it.  As music in general, it’s very good.  As remixes, there are a lot of original beats and some really interesting production elements.  The way these producers deconstructed, rearranged and rebuilt these tracks show their talent.  There is uniqueness and innovation.  It’s just really difficult for someone who has been a fan of JOC for over ten years to be completely objective.