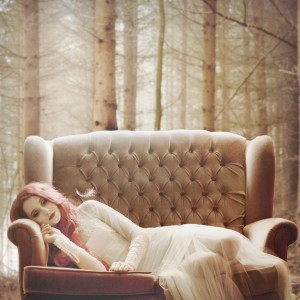 Janet Devlin releases her debut album, Running With Scissors in North America today on OK!Good Records. Replete with folk-driven pop songs and beautiful ballads, the album is a perfect showcase for Devlin’s unique vocal style. The singer-songwriter from Northern Ireland first caught the public’s attention in 2011 when, as a soft-spoken and shy 16-year old, she wowed the audience and judges on The UK X Factor with her emotional rendition of Elton John’s “Your Song” and Aerosmith’s “I Don’t Want To Miss A Thing.”

Devlin declined a record deal after the show to pursue her dream of writing and performing her own music, her way. The result of her determination to find and express her own artistic voice is Running With Scissors, an album recorded in just six short weeks with tracks co-written by Newton Faulkner and Jack Savoretti. Running With Scissors is a refreshing and soulful album about growing up, striking out on your own, getting your hopes dashed and your heart broken, and trying again; the polished, restrained production has strings, rolling percussion, and acoustic guitars that compliment, but never overpower Devlin’s vocals.

“Creatures of The Night,” a song co-written with Newton Faulkner, is the album’s whimsical opening track. It begins with simple acoustic guitar and Janet’s clear vocals in a fun, upbeat melody that builds to a string-filled slow, more serious bridge, then returns to the cheerful chorus. The track is a good choice as the opener as it shows off Devlin’s sweet folksy-pop side while also giving the listener a head’s up to expect the unexpected. The video for the song is an unexpected, color-drenched animated fairytale about a big bad wolf, some cute, bouncy owls, and magical sea creatures.

Tracks such as the first single off the album, “House of Cards,” as well as “Hide and Seek” tackle the serious subjects of heartbreak and unrequited love, but set them to toe-tapping, cheerful melodies. While on the airy, sweet, and upbeat sounding “Lifeboat,” Devlin sings about learning the difficult, and often painful lesson that just because you fall down doesn’t necessarily mean you’re broken; that you are strong enough to pick yourself up and try again. Running With Scissors also has slow and serious ballads like “Things We Lost In The Fire,” a gorgeous, wrenching track that wraps love and loss in vocals so raw and tender your throat will feel tight as you listen.  And “Wonderful” is a delightful, upbeat track that will have you bopping your head and singing along.  There is also a surprise cover of The Cure’s “Friday I’m In Love” that is sensitive and bouncy at the same time. The last track, “Whisky Lullabies,” is a song about leaving childhood behind that poignantly ends with the sound of a music box winding down. What a perfect way to end an album that explores the process of growing up and becoming independent and the love, loss, and new scary/exciting range of experiences that brings.

This is a wonderful debut album by a young woman determined to stay true to herself and her artistic vision. She may be just introducing herself to America, but with over 350,000 active fans and followers on Social Media, Janet Devlin is a talented artist who is ready to break out. She will be performing a special acoustic showcase on Monday, February 16th at 7PM (EST) at The Red Lion in New York City. This will be her American, as well as New York City, debut and is open to the public. If you will be in the NYC area, you should make plans to attend. Then when she’s playing sold-out shows and tickets are hard to come by, you can say “I saw her back when …”