You know that thing you didn’t realize how much you missed until it comes around again? Recently that thing has been great dance music.

One band that could always get people up and moving was Scissor Sisters. But they left the stages in 2012. Thankfully frontman Jake Shears still had a lot of music running through his veins. He resurfaced earlier this year playing Charlie, the unprepared new owner of Price & Sons in Kinky Boots. Then on August 10th he released his first solo album. 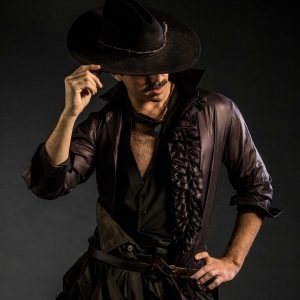 Jake Shears is a kick-ass rebirth of the pop genius.  It’s Jake’s signature vocals and writing style. It is a comfortable place for old fans to come back to and Jake is owning it.  The slow songs invite you to just sway and once you’ve got the lyrics down, sing along.

“Everything I’ll Ever Need” is one of those. The fast ones? You’re up, kicking off the stilettos, fist pumping and dancing your fool ass off. Songs like “Big Bushy Moustache” make you laugh while you dance.

“Creep City” is that slinky and sleazy pairs dancing number. “Sad Song Backwards” is the screwed up break-up song that birthed the rest of the record. When Scissor Sisters went their separate ways so did Shears’ longtime partner. Working through all of that landed Jake far from his NYC roots in New Orleans.  “S.O.B.” stirs fond memories of “Skin Tight” and “Filthy Gorgeous” in every dirty, sassy way possible.

What about instrumentals? Baby Daddy, Del, and Randy are gone. No fear.

With Jake’s move to The Big Easy and his pairing with producer Kevin Ratterman (Ray LaMontagne, My Morning Jacket) who called on members of My Morning Jacket the groundwork started. Jake then brought in Christian Hebel (Barbra Streisand) and Lance Horne (Alan Cumming) to do string and brass arrangements and then pulled out the big guns to really create that New Orleans sound with the Preservation Hall Jazz Band and Sturgill Simpson’s brass section.  This record has some serious musical chops. Each track was recorded in one session which Shears admits was kind of scary at the start but has resulted in a record he and Ratterman were very pleased with as well they should have been.

Jake will be taking the album on the road in the U.S. starting October 30th in Boston, MA and will culminate in Los Angeles on November 15th.

In the meantime, you can stream Jake Shears on Spotify and Soundcloud or buy it on iTunes or Amazon.