If you head to NYC you’re bound to see characters of all shapes and sizes walking around.  Okay, when I say shapes walking around I do, in fact, mean look for some Walking Shapes.  Not geometric shapes but the indie rock band, Walking Shapes. The band, comprised of Nathaniel Hoho, Jesse Kontansky, Jake Generalli, Dan Krysa, and Christopher Heinz formed back in 2012 and has recently dropped their debut mixtape, Mixtape Vol 1, to the world. We had the chance to have a quick question and answer session with them to get a little more insight into what makes the band tick and what’s coming up for them this year. Sit back and take a listen to these shapes before they walk away. 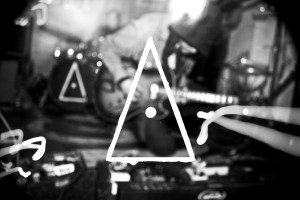 Recently, you dropped your first album, or should we say mixtape, for free on your website. Why go with a mixtape rather than an LP or EP? Any particular reason you decided to give this one away for free?

You see it in Hip Hop all the time. People release mixtapes to create a buzz then reload with a complete album.  Songs flow like water with this band. Because of that we are finding ourselves with a pretty extensive catalogue of songs for a band that has only been around for less than a year. We wanted to release the mixtape first to include some tracks that we knew were complete and that we were proud and we keep a few bangers in the vault for our real debut album.

You dropped “Keep” as the first video for the public’s viewing pleasure.  The video has a very artistic take on a relationship. How did the concept for the video develop? What does the video’s storyline mean to you?

The first day of shooting was the first day of a hurricane.  We actually toyed with the idea of finding the eye of the storm and filming it since ending a relationship can sometimes feel like a hurricane.  Alas, the girl I wrote this song about was not named Irene so the contempt that I would have the listener hear from the lyrics seem to be better suited to 2 people sitting naked in a bathtub full of red and blue dye. There were other challenges. On the way home after the first day of shooting we were in a hit and run car accident. We were not the hitters or runners. The concept developed through several brainstorming sessions with director Eamon O’rourke. We sat down and storyboarded the whole thing. I think Eamon really did well at nailing how I felt at the time I wrote the song.  Some of the stills taken from that day eventually ended up as our mixtape artwork.

How in the world did you come up with the name?

It’s funny you should ask this question. I think the name Walking Shapes actually came up with us!

In the weeks leading up to the release of Mixtape Vol 1 you released a new track every week in honor of your residency at NYC’s Pianos. Why give the weekly taste of what was to come?

We were excited to reveal our music week by week. With all the music coming out nowadays, we thought one song a week would be digestible to our growing fan base and if they liked everything they were hearing they would actually be excited to download the mixtape at the end of it all. I’m not yet sure what the release plan will look like for the debut record. I’m just focusing on bringing the album to a place where we’re proud of it.

On the mixtape, you guys took on the task of covering an artist who dominated at the 2013 Grammy awards, Frank Ocean.  What was the inspiration to put more of an indie-pop/rock style feel to the song “Lost”? How was it collaborating with your label mate Seasick Mama?

Marial (SSM) is a really good friend of mine, so working together with her was a lot of fun. She kind of tricked me into this ;). I was at home playing guitar and she asked me to learn “Lost” by Frank Ocean so I learned the song as she was sitting there on floor. We started working the song out and decided to go into the studio and record it. The process was a lot of fun. Dan Krysa of Walking Shapes, Will Fegan of SSM, Marial and I spent two days in the studio working things out. Dan and I tried to take a Walking Shapes production approach to the track and we let M and W do their thing. I feel it worked out really well.

The year is steadily coming to a close. What could we expect out of the next 365 days from Walking Shapes? Any plans for world domination?

Is domination the opposite of abomination? Sept 3rd at Knitting Factory with SSM and Holy Smokes Fest in Bushwick on September 8.  We are in the midst of shooting a couple of videos, one for “Horse”, the other for “Mechanical Arms”.  We are simply trying to win the hearts of listeners one ear at a time.

Walking Shapes on the web: