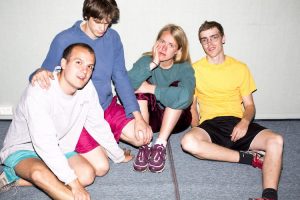 Swampy guitars scratch and grind while Ragnhild’s vocals have a slightly psychotic blend of sweetness and menace, somehow sounding like Poly Styrene one line with Amy Winehouse inflections on the next.

It’s a great example of unpredictable noise somehow forming a pop song.  It bemuses yet beguiles and their mixed influences (African, noise, folk) suggests there is much to look forward to in the future.  If you can’t wait that long then there are several self-released songs awaiting your attention (see the links below).

You can catch them supporting Darwin Deez on some of his September dates as well as an appearance at Airwaves festival, Reykjavik in November.

Written By
Paul Davies
More from Paul Davies
Bergen based foursome Living have been busy this year with a host...
Read More