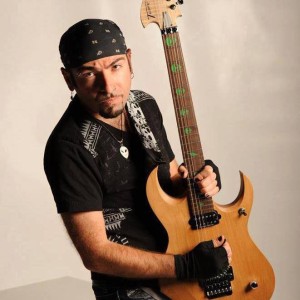 Steve Vai and Joe Satriani are two of the world’s most renowned guitarists famed for their breakneck guitar playing whilst still setting standards for others to follow. Now Los Angeles based guitarist Patrick Abbate is throwing his hat into the ring with the imminent release of his new album, Electric Dreams. Born in Oristano, Italy, Patrick started playing the guitar at the age of 11 and had five years of classic guitar lessons and music theory, as well as perfecting the electric and acoustic guitars. At the Conservatory of Cagliari, he studied experimental music and electronic music before moving onto Percento Musica in Rome where he honed his electric guitar playing skills thanks to a teacher called Frank Gambale. As well as the afore mentioned Steve Vai and Joe Satriani, Patrick’s influences also include Slash, Dimebag Darrell, Jimi Hendrix and David Gilmour amongst others. In 2007, he received the Randall & Washburn European artist of the year at the NAMM show in Los Angeles from the US Music Corporation and this lead to him playing alongside Willie Basse and his Black Sheep band, Kee Marcello, Megan McCauley, Irene Nelson, Marco Baz Bazzoni and many more. He was even Steve Vai’s translator and assistant when he conducted a master class in Italy. As well as being a pro musician, Patrick is an endorser and clincian for the likes of Techra Guitars, Eventide, Morley, Floyd Rose, Masotti, Seymour Duncan, DR Strings, Alhambra Guitars, Stefy Line, Reference Cables, MACE string dampener and Celestion, doing hundreds of music clinics around the world for them. But now he is ready to show the world what he can do with a guitar with the release of David Z Rivkin produced Electric Dreams (he has produced the likes of Prince, too) and if anyone is looking for a new guitar hero, Patrick Abbate will certainly fit the bill.

KICKSTARTER CAMPAIGN
With every new artist and every new release there needs to be live shows. Now some shows aren’t
possible without backers and Patrick Abbate is one of those new artists who could do with
backing and supportin order to get his music out there to the live audiences so be a part
of the Kickstarter campaign by going to the link below and lets the music flowing!