When you consider the greats of music history have been the innovators and the risk takers, it does make you wonder about the current music landscape.  An ocean of potential is polluted by sanitised preset-button production that smothers lyrics that seem to be written on autopilot and delivered through autotune. 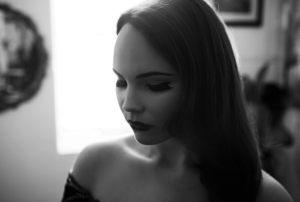 Perhaps it is history that has spoiled us.  Artists cannot fail to be inspired by the past and are therefore compared to it.  We see phrases describing female artists as ‘the next Lorde’ when the original Lorde has only released two albums.

It is rare when somebody comes along that can have their own voice and exasperate those desperate for a reference point.

However, Australian-born, New York resident MAY has the potential to do just this.  Just as Lana Del Rey’s “Video Games” seemed to come from nowhere and stood out as being somebody not trying to fill an Amy Winehouse-shaped void, MAY’s understated sound is a welcome breather from an overcrowded female pop market.  She isn’t the ‘next’ anybody and her voice has so many nuances and strengths that, while feminine,  actually recalls artists such as Jeff Buckley and Anohni.  Her soulful and operatic voice is introduced here on her first single proper, “Falling”, and it is magical in both upper and lower register.  It’s an emotional account of a love that’s never been replaced and is taken from the forthcoming EP, Phantom.

“I woke up in the middle of the night and wrote it,” she explains. “He was my first love, I was blinded by it. I’ve never been in love since and it’s the only song I have written that comes from this naive vulnerability”.

This atmospheric, piano-led drama continues on the path carved out by “Ballerino”, a song made available online last year and both songs are sumptuous events that make you catch your breath at the end.  “Ballerino” is smoky and cinematic and you are almost listening for the vinyl crackle such is its classic, timeless feel.

She’s been performing live in places like Ronnie Scott’s, London, Electric Lady Studios, NYC, as well as several churches around Brooklyn.  Here’s a live performance of “Falling” from San Damiano that shows her raw talent is not merely studio-enhanced.

Written By
Paul Davies
More from Paul Davies
Here’s some of the hottest, latest music to pleasure yourself with… EMPRESS OF...
Read More