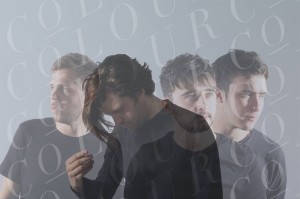 COLOUR are a UK 4 piece melodic indie band hailing from Liverpool, Stoke and Rutland. Formed around the talents of James Tidd (Vocals), Scott Harvey (Guitar), Connor Dickson (Drums) and Liam Downey (Bass), they create melody-washed, shimmering indie pop that sparkles with dream-infused hooks and poetic lyrics. Producing and recording much of their music from their own studio, Canvas Sound, they control the process at every stage.

This is a band exuding confidence honed from over two years performing together and perfecting their craft. Creating hook-laden math-rock is an art form. What sounds so deceptively simple belies an instinct for the construction of melodies and harmonies that lends their songs depth and clarity.

Their latest single “Strangers” is a wonderfully shimmery slice of guitar pop. Reminiscent of one their previous singles “Red”, it is sweeping and epic in it’s scope. The guitar is so bright and clear it positively sparkles from the speakers, firing and glittering; all the time underpinned with slick, groove-like bass and sharp, crisp, driving, syncopated percussion. Touches of keyboards wash in and out as Tidd’s perfectly pitched vocals implore ‘The streets are filled with strangers, so don’t run and don’t hide’. It is an intoxicating and overwhelming blend of searing emotion and musical intensity.

Verses are taught and focused, building tension which is released by soaring and euphoric choruses. It is undoubtedly poppy with a darker edge; not all that shimmers is gold. Because of the depth and maturity to the writing, “Strangers” gives you something new with each listen. Layers of deft production create a texture to the music as it lifts and skyrockets, exploding crystals of melody across the soundsphere.

There’s a buzz surrounding them. They are emerging as a genuine force. Hotly tipped across the blogosphere and by several music magazines, in the spring of 2014 the band were awarded the Merseyside Arts Council; Music Development fund (alumni such as All We Are and Dan Croll). They have also been championed by BBC Introducing’s Rob Adcock, naming them BBC Introducing ‘New Band of the Year 2014’ from Stoke.

COLOUR cite influences ranging from The Beatles and The Police to Kate Bush and Joni Mitchell and it shows.