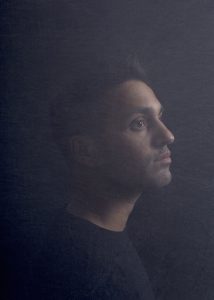 As leader and founder of the London Contemporary Voices Choir, Anil Sebastian is no stranger to the live scene but now he is about to release his first solo album, Mesonoxian on 28 October.  The album title means “pertaining to the hour of midnight” and this is a clue as to what to expect as based on the four tracks unveiled to date, we find a whole host of sounds; rich choral tapestries with haunting, ethereal textures.

“We Both Know” has an understated backing but this brings attention to his soaring dramatic vocals which recall artists such as Martin Grech and Anohni.  It’s no surprise that he has several Bjork tracks reposted on his Soundcloud page as the percussive backing on this, and new song “Closer” is reminiscent of her Matmos collaborations in the Vespertine era.

There’s a uniqueness in his work, and his strength as singer and producer as well as arranger gives his songs that added cinematic edge.  Alongside the expected electronic accompaniments, he incorporates several ethnic layers to enhance his sound.  If you scratch beneath the surface you’ll hear zithers, gamelan and raga-influenced strings.   His new animated video for “Closer” compliments its light/heavy tones of colour and mood.

He has a headline show lined up at the ICA in London on 27 October to promote the album launch.