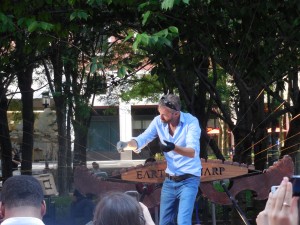 Efforts to experience the Earth Harp live took me to Brooklyn this past Saturday to the Metro Tech complex, home of the Polytechnical Insitute of New York University and hosts of the World Science Festival. The organizers felt that the Earth Harp qualified as “innovative music” and invited William to bring the instrument to be part of “Innovation Square.”

Finding the Earth Harp was, obviously, easy. Although the resonator was set up on a low stage at the edge of the park part of the complex’s ‘quad’, the strings ran to the open frame face of the Bern Dibner Library building. Here I found William enjoying the shade the numerous trees provided. Words cannot explain the joy of finally meeting him in the flesh. One could not have planned a better event for this meeting as William and I have had some very nerdy discussions on the science of sound and music. He told me about one of the many exhibits at the festival that he really enjoyed. I never did get to it though. He also shared that he would performing again in a little over an hour.

After getting some much needed food, I wandered around the square taking in all the outdoor booths and their various exhibits and demonstrations. Around 5:30 I took up residence at the Harp and waited for my opportunity to finally experience this amazing instrument. I watched as William carefully prepped its strings with a resin block and ensured all the necessary equipment was ready to go. At 5:45 he took his spot between the strings and began the process of pulling the most wonderful sounds from them. I had been right: broadcasts and recordings do not do justice to this instrument. 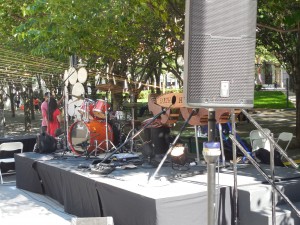 At the end of the first arrangement, William spoke about the science of the Harp and its uniqueness as a string instrument. It is not hammered like a piano, plucked like a traditional harp, harpsichord or member of the violin family, nor is it bowed like violin-like instruments. William demonstrated what happens when the strings are plucked, something I’ve never seen or heard before in videos or during his run on America’s Got Talent. The sound is not pretty and the notes are lower than what are produced when the strings are pulled. He further explained that plucking causes the strings to vibrate in a circular motion and that motion is what produces the sound. Sliding resin-covered gloves stirs molecules within the metal of the string, so the actual string creates the sound internally. The resonator also acts as the bridge for the strings, similar to a guitar or violin type instrument. Whatever surface is under the strings is the “sound box” and it is here where, unlike any other instrument, people get to experience the resulting sound from technically being inside the instrument. At the end of his explanation, William had proved to the crowd that music nerds really are some of the majorly cool kids.

We got a second arrangement which I allowed myself to become completely immersed in.  Again, there aren’t words to explain the sound, the feelings, the Harp. Richard Sherwood, longtime friend and percussionist, started the piece with one of William’s percussion creations, a drum cloud. Its configuration creates sounds similar to timpanis. Richard also accompanied the Harp on a traditional drum kit. Together the two created what William called one of their many “mini symphonies”. It was gorgeous.

If you saw William on America’s Got Talent or have been made aware of him and/or the Earth Harp, and have any curiosity about attending a live performance, do it! It is like nothing you have heard or experienced in music before. William travels the world with the instrument, so watch his Facebook and website for listings of performances in your area.