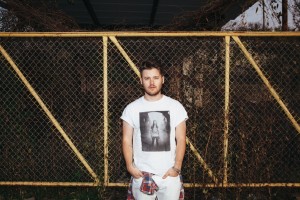 Dalton Diehl aka Young Brother formed in April of 2014. After being signed to EMI and touring all over the country, Diehl took the chance to hit the reset button. Kamikaze is a four track ep that reflects a beautiful reinvention of electropop that we are truly happy to have hit our ears.

The EP begins with the title track, “Kamikaze.” A very funky piano and drum intro then with gentle poppy vocals until the chorus; “we can tear it all down baby, just let go, it could be a good thing, watch this all explode… blow it up up up up KAMIKAZE!” then this unique synth mash up unlike anything you’ve ever heard before. It’s hard to describe as it is very chaotic but connects back to the synth meets guitar melody seamlessly. With its unique composition it throws you into the insane emotion of love. It’s as if the song is going over the fact that you have to risk it all in order to love. When I heard the track “Kamikaze” the first time, I started questioning myself as why in the world this isn’t on the radio or the local discotheque. As soon as it hits your ears you will want to dance. Even the stiffest of dancers will feel it.

Sometimes there is a difficulty making a remix as good as the original, not this time! You’ll get the chance to check out the “Kill Them with Colour” remix…

The rocking out will not stop with tracks like “Work it.” The song really highlights Diehl’s vocal ability as the majority of the melody is nothing more than a beat with a gentle bass line with synth. You can tell in his vocals that there is an influence of the 90s pop artists he grew up with. Very pop mixed with a hint of R&B. Upon the bridge he carries this staccato vocal then goes back into a smooth vocal in the chorus so seamlessly. This guy knows pop, knows it well, and does it flawlessly. One of the big highlights in the song is when you hear the line in the chorus “I’m addicted to the way you work it, slow it down and…” then what sounds like a spaghetti western guitar highlighted by the synth work in the song comes out. It seems so unorthodox but brings you on this tempo roller coaster. With that change of tempo you flow with this hypnotic spell he goes into as he’s entranced by this girl’s movement from across the room.

That is Young Brother’s Kamikaze EP is a nonstop pop bomb going straight for the eardrums that will have you crash landing into your nearest dance floor. I’ll be keeping an eye out on Mr. Diehl aka Young Brother; I see big things for him. he’ll be flying Kamikaze style into major airwaves in no time.

Kamikaze is available on iTunes NOW.

Written By
Serena Butler
More from Serena Butler
In the latest issue of Fourculture Magazine we had the chance to...
Read More